Change of Heart by Mary Calmes 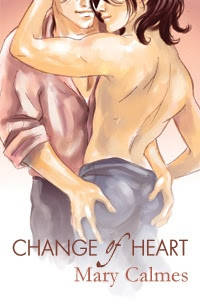 Blurb
As a young gay man―and a werepanther―all Jin Rayne yearns for is a normal life. Having fled his past, he wants nothing more than to start over, but Jin’s old life doesn’t want to let him go. When his travels bring him to a new city, he crosses paths with the leader of the local were-tribe.

Logan Church is a shock and an enigma, and Jin fears that Logan is both the mate he fears and the love of his life. Jin doesn't want to go back to the old ways, and mating would irrevocably tie him to them. But Jin is the mate Logan needs at his side to help him lead his tribe, and he won't give Jin up so easily. It will take time and trust for Jin to discover the joy in belonging to Logan and how to love without restraint.

Overall
I wanted to enjoy this novel more than I actually did, and while parts of it really grabbed me and held my attention, most of it dragged on and on and on. Part of the problem was imbalance of information. On one hand, we would be given the same information repeatedly, and while it was important, it wasn't so difficulty to understand that the reader didn't get it the first time. On the other there was a habit of not mentioning a vital piece of cultural information until it's useful to the main character, either for him to use or to be used against him. While with the number of cultural-specific elements it would have been difficult to be warned about things, I felt like information "talking up" the main character was stressed while plot-relevant information was left on a need-to-know basis.

The storyline, while it had its faults, kept me interested enough to continue reading, and I was happy with the results, but there were definitely parts that left me wanting. I think my biggest mark against this book is that I enjoyed it to a degree that made me want to like it more and made me want to see the story live up to its potential. I'm not sure I'd recommend this book to someone else, but I wouldn't talk someone out of it either, especially if they enjoy shapeshifter stories.

Strengths
While neither of the characters are types that endeared me to them, I appreciated them as people, and I appreciated how they were handled. Logan is a top dog―so to speak―and acts accordingly. Sure he has tender moments with his mate, but he also is pushy, bossy and, at moments, scary in his violence. I found Jin annoying, but I could also understand some of his behaviors and defenses, even if they did make me want to grab his ear and twist until he apologized. For me, his flops between “woe is me” and “cocky bastard” were hard to take, although that's just how some people are. Even not liking the characters, I thought they were interesting.

Another strength was the challenge from an outside character and the resulting struggle between characters, both trying to protect one another while facing despairing odds. The build up from when the challenge is issued up through the resulting solution were pretty intense, although some of the resolution felt a little too easily resolved.

Weaknesses
Info dumping had to be my biggest peeve with this novel. Admittedly, there is a lot of vital cultural information for the reader to know, but sometimes we're given too much information―repeatedly--and other times we're just given the brush off with bare minimal information. When the info was being repeated, I felt like the author was playing me as stupid, and when it wasn't developed, I felt like the author was hiding things or not bothering. I think this was even more frustrating because of the potential this world had in being exceptionally interesting.

Along those lines, I think if this were the second or third book in a series, where world development had already happened to create a basis for what's going on, then things may have come out smoother. As it was, the writing felt a little bogged down with facts.

Jin portrayed all the qualities of a “Mary Sue”: He's special (not just to one or two people, but to everyone, even if it's just so they can hate him; he's powerful; he has specific physical attributes that distinguish him as different; and he's the sole focus of the story. The last I'm willing to let slide, a little, because a lot of other things do happen that revolve around him but could be considered outside events. Otherwise, he comes across as bit of a self insert, and some of his more feminine qualities made me feel like he was written as a stereotypical woman. However, these moments didn't happen all the time, which made them all the more glaring when they did.

It's difficult with main character with special powers who are the focus of the story to not come across as being Mary Sues, but it is done. However, Jin's “Mary Sue qualities” didn't detract too terribly from the story, most of the time. Usually he just came off as a little self-centered.

Requested this book for review.
Posted by Unknown at 20:54