Dark Edge of Honor by Rhianon Etzweiler and Aleksandr Voinov 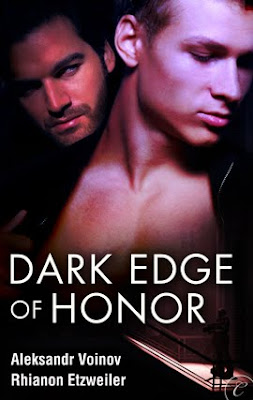 Blurb
Sergei Stolkov is a faithful officer, though his deepest desires go against the Doctrine. A captain with the invading Coalition forces, he believes that self-sacrifice is the most heroic act and his own needs are only valid if they serve the state.

Mike, an operative planted within Cirokko's rebels, has been ordered to seduce Sergei and pry from him the Coalition's military secrets. His mission is a success, but as he captures Sergei's heart, Mike is tempted by his own charade and falls in love.

When the hostile natives of the planet Cirokko make their move, all seems lost. Can Mike and Sergei survive when the Coalition's internal affairs division takes an interest in what happened in the dusty mountains of Zasidka Pass…?

Overall
In a story as gritty as the planet it takes place on, Mike and Sergei struggle with their environment, their armies, and their own feelings. While this isn't a light read, it's not overwhelmingly dark either, immersing the reader in Sergei's struggle to keep hope in what seems like a doomed situation.

The plot, the beginning of which is pretty much described by the blurb, is excellent and definitely interesting, but its the characters that, through strong writing, come alive on the page through their strengths and weaknesses. On my initial read, I had two problems with the story, which I've listed below, but upon re-reading I reconsidered these "weaknesses" and feel they were both handled well in the situation. The main issue, which I think pushed the two supposed weaknesses, was that the blurb sets up a heavy plot that doesn't start really moving until 40% of the way through the book.

That being said: The wait, and the build up to it, are worth it.

Strengths
The characters are in a difficult situation and almost constantly show their bad side, but despite this they are easy to fall in love with because even in their dark moments they struggle for love and hope (without it being as cheesy as that just sounded). Mike, who feels like the 'good guy' since he's not part of the invading army, is an interesting conflict, since while he may be on the 'good' side in the war, he's the more underhanded in the relationship. Sergei, who is part of the militaristic invasion, is almost naive in his dealings with Mike, making the good guy bad and the bad guy good, blurring the lines of there being any sides at all.

This is developed further as we meet Pat and Ulyanov and Nikishin (both of whom I want more of), who are not, on any level, flat characters. In fact, and this applies to the main characters as well, there is so much not talked about beyond a passing mention. Much of what is happening with the characters that isn't vital to the story that is only alluded to, which in its own way is frustrating, but is perfectly acceptable for the story we're being told. It's great to have a story that is bursting with history that we only get a small taste of.

Once the plot really starts, it moves quickly building off all the previous information and relationships. Details that seem insignificant are brought to light as being important without the authors seeming underhanded, misleading or sneaky. One element I enjoyed most about this story is that while it involved politics, war and star-crossed lovers (of sorts), it never relied on a sudden plot twist. What you see is what you get: This story is about the struggle of the individual and the circumstances he finds himself in.

In addition, this novel has a very attractive cover, which doesn't mean much for an ebook, but it still is worth noting, although I've noticed this publisher is better at providing appropriate and understated covers.

Weaknesses
There are two points that I think count as weaknesses, although I know the one at least was, if not on purpose, at least recognized by the authors.

The beginning of the novel is sex heavy, and then followed by the second half of the novel which is plot heavy and completely lacking sex except in moments of flashback. There are obvious reasons for this flip, the most important of which is that the plot and major amounts of sex couldn't happen at the same time, but it is slightly jarring in the switch and did leave me wanting for more plot in the beginning. I felt it was worth the wait and the sexual encounters between the two men did further the plot and character development.

There is a slight feeling of the two men falling in love rather quickly, but it was done in a way that only niggled me slightly, as Sergei hasn't really experienced someone like Mike before, and for Mike there is just something about Sergei that grabs him right from the beginning. Plus they are in a high intensity situation, which amps up both their emotions and reactions.

Requested this book for review.
Posted by Unknown at 07:17