Hart and Soul by Nica Berry 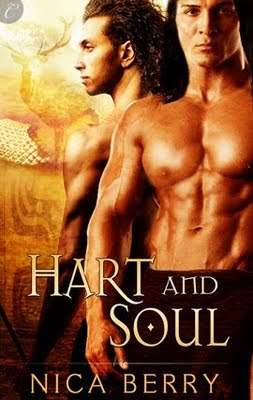 Overall
Although there was plenty to enjoy in this story, there are some large parts of it that are difficult to get through, and I could see this stopping some readers from finishing it. I struggled with it and ended up skimming the parts that made me uncomfortable and would have preferred them not be in the story at all. I internally debated if they had a purpose, aside from plot and the author's attempt to show not tell about events, but couldn't find a reason for them to be in there that satisfactorily justified their presence.

Strengths
Characters. I really enjoyed Jennar, Niann, and Aspen, even though I wanted to smack Jennar upside the head and coddle Niann. I enjoyed the varying characteristics they each had, including their strengths and weaknesses, although it is the base of my frustration with Jennar. The feelings the two main characters feel for each other is a little hard to understand since so much of their time is spent apart, but through dreams and their constant focus on one another, I can wrap my head around their feelings. The antagonist of the story is good at being just that, and while some may have issues with the resolution, I found it appropriate with the lesson than Aspen was teaching.

Plot. While I may not have enjoyed how the author handled much of the plot, I did enjoy the overall plot and some of the places Berry went. The use of spirit animals as indicators of roles in the tribe was great, and the dual gender of the Deer was well handled in the end. The struggle, the action, the conflict and resolution were all well paced and interesting, and while some may see parts of the final resolution as a cop out, I found it acceptable and inline with the antagonist's character, plus it gave me a happy ending. The created world--ours in the past, perhaps--was enjoyable to spend some time in, even with some of the hardships that the characters experienced.

Struggle Against Society. Jennar's fight against his clan and the pre-existing ideas they've been led to believe was painful but right. It was powerful to see another example of how people will do horrible things to another individual because it is "right" and the group at large doesn't see how it hurts the other person, especially when that person has been led to believe he deserves it and it's his role. While sad, the resolution in this vein of the story had appropriate closure.

Weaknesses
Sex. The actual description of the sex is not what bothered me in this case. Instead, it's the type and amount. A large chunk of the sex described is heterosexual, which, while not what I look for in a M/M romance, is forgivable/understandable. What I found more difficult to swallow was the sex scenes that were equivalent to rape. While on some levels it wasn't (since the Deer "accepts" the role), on many levels it was and I felt wretched as I quickly skimmed over the parts. Although only the first is described in depth, I don't think the reader needed to constantly hear about it and this was a case where saying that it happened would have been enough. I found this to be the most frustrating element of this book and what earned it's low score.

True Love. Much of the relationship between Jennar and Niann doesn't seem to be built off much and in the beginning it's difficult to understand why they feel the way they do toward one another. Once the dreams start, I began to feel more of their connection, but in the beginning it was distant and difficult to grasp.
Posted by Unknown at 17:26