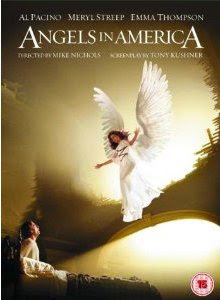 Angles in America - Tony Kushner's groundbreaking, Pulitzer Prize-winning Broadway play about love, loss and loneliness -- the basis for this six-hour HBO miniseries -- took more than 10 years to make it to the small screen. Starring Al Pacino (as real-life legal counsel Roy Cohn) and Meryl Streep, the drama examines the first few years of the AIDS epidemic in the mid-1980s, set against the moral absolutism and unresponsive backdrop of the Reagan Administration.

Part 1 - (rent/buy) This is just the first three hours of the six-hour miniseries. It's difficult for me to sit through because the characters are so human--making mistakes, being scared and making poor decisions, giving in to themselves. However, because they are so human, it makes their struggles so much more powerful to watch. The first two hours were more of a struggle as the characters begin to take their place on stage and prepare for the conflicts to come to head. The third hour got more interesting as we see possible paths that may be taken and a hint of where the story is going. While I can't give a full report until I've seen the second half, I have to admit that so far it isn't going in the direction I thought it would.

Part 2 - (rent/buy) This movie really taught me to not judge a book by its cover. I'm not even sure what I thought it was about--except the AIDS epidemic--but it definitely wasn't what I thought it'd be. It wasn't a movie that wow'd me, but it definitely got me thinking about things like loss and life and family and being honest with yourself. I loved how deep all the characters were: The good guys had faults and the 'bad' guys had good points (or at least human points). The acting was superb, and it was funny to try spotting the characters who played multiple roles. It was also an interesting technique, since obviously they wouldn't have needed to do that, but I wonder if it harkens back to the movie's origins as a play, where one person might play multiple parts. This was very good, and while it wasn't something I'd want to own, I could definitely see it finding its way on some shelves permanently. 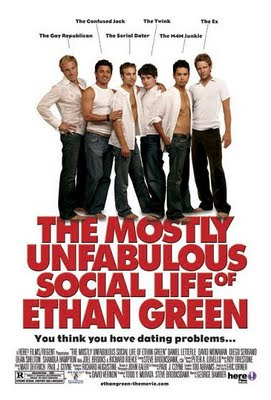 The Mostly Unfabulous Social Life of Ethan Green - Ethan Green (Daniel Letterle) has no problem finding guys who want to sleep with him or even date him, but finding someone to settle down with is another story. Given three choices, will he find a Mr. Right, or is he destined to an unfabulous existence? He'll choose from a sexy teenager, a hunky jock or his ex-boyfriend who's about to get married George Bamber directs this comedy based on a popular gay-themed comic strip.

(rent/buy) This was a goofy romantic comedy that just happens to have gay lead couples. It was a bit over the top and I'm not sure if that was because of the acting or it was a planned part of the movie. I wasn't too interested in the beginning as Ethan makes his poor decisions, but once he slept with one of the guys, I felt the drama really started as Ethan began to realize what he wanted and then just had to figure out a way to get it (and if he deserved to get it). This was a pretty good movie if you just want something light and gay and don't mind stereotypes (which it seems to mock). 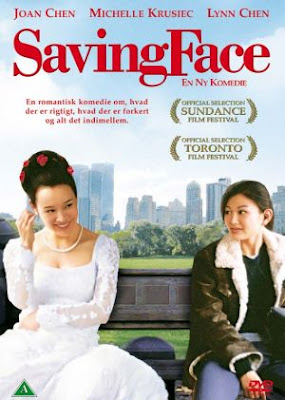 Saving Face - Dutiful daughter Wil (Michelle Krusiec) sidesteps her mother's (Joan Chen) attempts to marry her off in Alice Wu's romantic comedy. At 28, Wil's the old maid of her traditional Chinese family, so there's no way she can tell them about her budding lesbian romance with Vivian (Lynn Chen). But her widowed mom has her own problems, as she learns she's pregnant at 48. Kicked out by her disapproving father, she seeks refuge at Wil's place.

(buy) I had this in my queue, but it wasn't necessarily a top contender of interest. However, I was pleasantly surprised by how much I enjoyed this movie. It has excellent acting, a good plot, and strong cultural and social implications, plus there are love stories all over. This isn't a straight forward love story, as most of the focus is on the mother-daughter relationship, but the romance definitely plays a significant role. I definitely recommend people who like these genres rent this, or if they see a good deal, buy it. Definitely a sweet, romantic comedy. 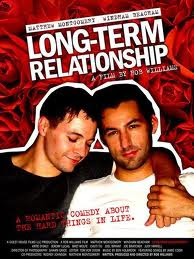 Long-Term Relationship - Tired of the unsatisfying singles scene, Glenn (Matthew Montgomery) answers a personal ad and meets Adam (Windham Beacham), a handsome Southern man seeking a long-term relationship. The two hit it off immediately, but their initial attraction is soon put to the test. Glenn's gay friends say he'd be happier playing the field again, but his straight pals encourage him to work at the budding relationship in director Rob Williams's romantic comedy.

(rent) The story of a playboy who decides to settle down, the concept had potential (democrat vs. republican, playboy vs. conservative), but mediocre acting left me wanting more. The end resolution was pretty good, and a tricky, creative way to go, which I applaud, but I wasn't emotionally invested in the characters, so I felt like, well, that I was just watching a movie. Not bad enough that I shut it off half way, but not good enough that I'd want to sit through it again. 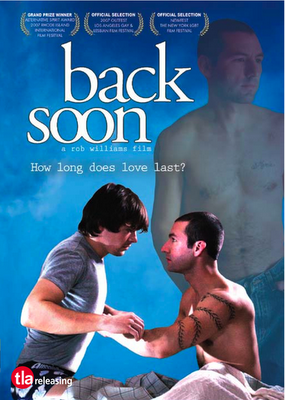 Back Soon - In the wake of his wife's death, Logan (Windham Beacham) becomes fast friends with Gil (Matthew Montgomery). But after a drunken night together ends with the two straight men sharing a steamy bed, the two must reexamine their sexual identities as they forge a new relationship. Writer-director Rob Williams's touching and surprising drama won the Alternative Spirit Award at the 2007 Rhode Island International Film Festival.

(meh) This suffered from some of the same acting as Long-Term Relationship, which may make me partial on the review. This had a potentially interesting plot with some supernatural elements (spirits inhabiting bodies that weren't theirs), but relies too heavily on tense emotional scenes that the actors can't pull off. Not bad enough that I shut it off half way, but not good enough that I'd want to sit through it again.
Posted by Unknown at 20:51