Apples and Regret and Wasted Time by Cornelia Grey 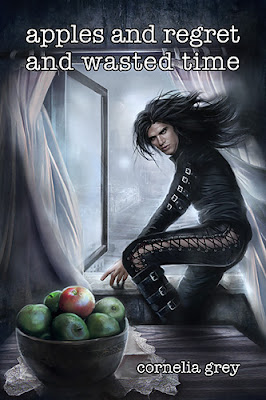 Apples and Regret and Wasted Time by Cornelia Grey
Stars: 4/5

Overall
A touching bittersweet story that both satisfies and leaves the reader wanting more.

Strengths
Names. None of the characters are named, which was just really amazing for some reason. I didn't realize until my second read through, but it definitely lent an air of not necessarily mystery--which it did--but created a world in which for the narrator only two people existed: Me and Him.

Emotions/atmosphere. In the short space Grey worked in powerful emotions by being almost muted with them in the story. While I didn't get choked up, I definitely wanted to smack the idiot upside the head. The narrator's voice is contemplative and straight forward, giving the entire story a bleak ambience that is only forgotten in brief moments when the two men are being lovers, not themselves.

One liners. Some great one liners are in this, one of which is weakened by being the title of the story, but several are beautifully constructed and tug on the heart strings.

Weaknesses
Like most enjoyable short stories, the hardest part of this is that we only get 16 pages of these two characters and the world they exist in. I wanted more. This, of course, isn't a failing in the story, but even going in knowing this was a bittersweet tale, I wanted them to have their happy ending...and I still do. I'd love to see more.

Cover. Don't get me wrong, I really like most of the cover, but the clothes that the man is wearing in the picture seems too trendy to match the main character of the story and the darkness of the story overall. The fruit, the window, the man's appearances are all otherwise excellent, but the clothes are misrepresenting, I felt.

Opening. The story starts a little slow, but it's not long before the interesting things start happening.

Note: Received a copy of this story for review.
Posted by Unknown at 20:07

I read this earlier today and really enjoyed it. I hadn't even realized about the names. Wow. Well done indeed, that.

I love the cover! It seems like a lot of cover for a short story, though.