(rent) This movie was not my cup of tea. It wasn’t bad, but it was slow moving and felt very indie. It was one of those films that I think would work well to analyze and pull apart the individual scenes to see what deeper commentary the director was making, but in general it didn’t keep my attention.

The Giver - In a future society called The Community, pain, war and disease have been eradicated, as have individuality and free will. When a teenager named Jonas learns the truth about the real world, he must decide whether to reveal all or remain quiet.

(rent/buy) This surprised me. Mostly because the previews I’d seen made it look much more like a sci-fi action movie than it had any right to be. Being familiar (and in love) with the book, I took one look at those previews and threw up.

The movie itself stays exceptionally true to the book. This is one of those instances where advertising treated this story badly. There were a few instances where things were changed from the book, but for the most part those were minor and felt mostly like they were updating elements for the modern viewer. The romance may have been a little heavier, but still generally light (as in the book). I would recommend everyone give this movie a try, at least.

Nabari No Ou - Silent, apathetic, yet mischievous, 14-year-old Rokujou Miharu is the bearer of the hijutsu, "Shinrabanshou," a powerful technique many ninja clans desire to possess to become the ruler of Nabari. Keeping apathetic, Miharu attempts to reject their invitation to join their ninja "club." However, after numerous attacks, he finds no choice but to join their group as a means for his survival.

(buy) Is this a ninja show? Yes. Is it actually about two boys who care about each other and the promises they make to each other? Yes. For me this show was a good mix of character development and action. It does trudge through a fair amount of ninja politics, but everything felt personalized enough to keep the story from dragging. Miharu is a nice change of pace from other main characters, and I couldn’t help but to fall in love with him just a little.

While no relationship is explicitly stated as being romantic, there are definitely hints/leanings toward that. The word choice and levels of loyalty go beyond that of “just friends”, which makes the story even more interesting, even if it doesn’t delve deeper into the actual realtionships.

No. 6 - In a near future world, after the last great war, most of mankind lives in a handful of city states. There, for the privileged elite, life should be perfect. But for young Shion, the only thing perfect has been the nightmare his life has become since letting a strange boy called Nezumi spend the night in his apartment.

(buy) This little show is sweet, commenting on society and individuals, while also developing the plot and characters enough that nothing feels stagnant. While the boys are developing a relationship, it’s very much not the focus of the story (and I believe there are only two kisses in the whole show). The world building is bare bones but provides enough to paint a realistic picture. Definite worth watching. 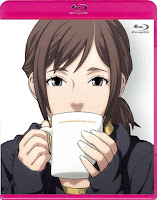 Time of Eve - Sometime in future Japan, androids have been involved in every aspect of peoples lives. One day, upon checking his android's behavioral log, Rikuo noticed his android's returning times have been odd recently. With his friend Masaki, they find a small cafe called Eve no Jikan where androids and human are not seen as different.

(buy) This movie (originally a series of short episodes combined into a single movie), is cute and fun, but it will leave you wanting more. The depth of the story and the world are just scratched, hinting at things much bigger than the two boys the movie focuses on.

However, the story as it stands is still cute, sweet, and a nice mix of funny, making it perfectly enjoyable on its own.

They Were Eleven - Ten young space cadets are put onto a decommissioned spaceship as their final test. If they pass this test, their lifelong dreams of being valued people in their respective societies will come true. Their orders are to survive as long as they can with what they have. However, once they arrive at the ship, they find that their crew has gained an eleventh member -- and no one can remember the original lineup well enough to recognize which of them is the newcomer.

(rent) This is an older anime, and it shows, not just through the animation and design, but through some of the choices the narration takes. That said, I still think this is one that is worth checking out. It takes an interesting look at group dynamics, power struggles within groups, and high-pressure situations. And it leaves you guessing the whole time, but gives a nice wrap-up at the end so you’re not left confused.

The Secret World of Arrietty - When a tiny "borrower" named Arrietty makes friends with a young boy many times her size, she must also shield her family from his towering elders. But trouble brews when a curious maid starts asking questions.

(rent) This is a sweet little movie, but while it was enjoyable, and kids will like it, I’m sure, it seemed to lack much depth. There was a bit of plot, character development, and crazy villain, but it lacked anything too substantial. I didn’t mind sitting through it once, but it’s not something I’d run out and buy.
Posted by Unknown at 18:18

Older Post Home
Subscribe to: Post Comments (Atom)
"When I get a little money I buy books; and if any is left I buy food and clothes"
- Erasmus