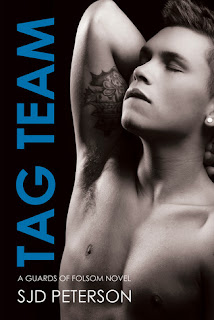 Length: 220 pages
Blurb
Following the death of their sub, the former owners of the Guards of Folsom, Robert “Bobby” Alcott and Rig Beckworth, were left to pick up the pieces as best they could. After seven years, these two Doms are ready to move on and find the boy who will complete them. Their painful past comes crashing back when they meet Mason Howard, a submissive who just weeks ago lost his Doms in a car accident.

Reeling from overwhelming grief that’s complicated by a severe social anxiety disorder, Mason can barely leave his home. When Rig and Bobby find him, he’s hit rock bottom, believing life is no longer worth living. Bobby and Rig set out to prove the younger man wrong. Fate has brought the three men together, but they’ll have to face the pain of fear and loss head-on before they can all truly live again.

Overall
Despite an interesting plot and characters, I found the story to be slow-moving at times and it just didn’t grab me.

Review
I enjoyed Mason’s struggles and the care and tenderness that Rig and Bobby show him. That said, I found myself skipping over large chunks of text on my second read, as it didn’t move the story forward. This is a personal preference, but the verbosity seemed to bog down the storytelling.

But, keeping that in mind, I still want to get the next in the series. The reading isn’t painful, it’s just not to my liking, and I enjoy the characters and their stories enough to be curious about the men on the side who get mentioned. So even though this story didn’t blow me away, I enjoyed it enough to want to continue.

One of the best things for me was seeing two doms who were very different and who were changed by the sub they were dealing with (rather than the sub who is always the changed one). In addition, at least one of them has a judgmental thought about the previous doms and later rescinds it in his own mind as he comes to understand why it would happen. He still think it was wrong, but he reaches an understanding.

It took me a while to write this review, one because I didn’t have much to say, and then because I needed to reread it for a proper review. But even then, this book didn’t scream at me what to write about it. So sorry for a mediocre review that you had to wait for. I think my overall review would be: If you liked the first in the series, you’ll probably like this one at least a little. If you didn’t read the first in the series...then you should start with that one!
Posted by Unknown at 20:55