Pup (Guards of Folsom: Book One) by SJD Peterson 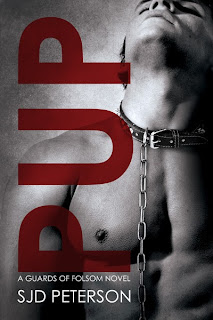 Length: 214 pages
Blurb
Micah “Pup” Slayde knows he wants Tackett Austin the moment he lays eyes on him in the Guards of Folsom. Micah wants to have purpose, to be taken care of, and to take care of his Dom—wants to trust him completely, live for him, belong to him. To become his everything. Micah is sure Tackett is the one. The problem is, in order to be the perfect sub, he needs to stay focused, and that’s not easy for Micah, who suffers from what he refers to as a “broken brain.” Focus and adult attention deficit disorder rarely coexist.

Ever since Ty Callahan and Blake Henderson’s collaring ceremony, Tackett’s been thinking too much about his own loneliness. Even though Ty introduces Micah and urges Tackett to give him a try, Tackett isn’t so easily convinced. He’s spent his life pursuing a successful business career, and the subs he dominates almost never enjoy the kiss of his leather twice. Twenty years Micah’s senior, Tackett has no interest in taking on and taming such a young and naughty sub—but it’s difficult to resist such an adorable pup when he begs.

Overall
An enjoyable, if not surprisingly mellow, novel that taps more into the psychological than the sensual.

Review
I went into this novel with fairly high expectations, I think, and the novel didn't exactly disappoint, but it wasn't what I'd been expecting either. The story is very mellow and the conflict happens in small waves rather than a rising action—climax—falling action style. In some ways this works for the books, because it shows Micah's small improvements over time in a realistic way. It also lets the characters come together (specifically the Dom) and create an emotional bond.

However, it also meant that when I hit the epilogue, I was surprised. I was at the end? Because nothing had really happened yet. Because all the actions are small waves, there was no big wave to ride out the end of the story on. Again, this isn't necessarily bad, but it does interrupt the reader's expected story flow and make the ending seem sudden.

Something that could work against this story for some readers is that the main plot takes place over two weeks. It works for the purposes of the story and it works for the characters, but some people may cry "instalove" although I don't think it applies. We don't see every day of those two weeks (and I feel that we could have seen more), but the days we see are the ones pertinent to the story and development.