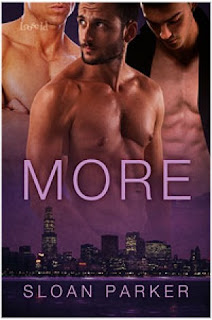 Length: 245 pages
Blurb
For fifteen years Luke Moore has lived by three rules: stay off his father's radar, never spend more than a single night with any man, and never fall in love again. But one night of explosive sex and two men whom he can't get out of his head have Luke breaking them all. Richard and Matthew push him past all his boundaries--both sexually and personally--and now he's no longer hiding from his senator father; he's taking him on. And he isn't just falling for one man; he's falling for two. If you're going to break the rules, might as well break them big.

But Luke's father has his reasons for hating how his son lives, and he'll do whatever he can and use all his power to keep Luke away from Richard and Matthew.

Review
This is a long novel, which isn't a bad thing--at least not completely. The pacing is fairly steady in regards to the actual plot. However, the length at times felt due to the author not focusing on the flow of the story, or maybe focusing too much on too many different parts of the relationship.

The main conflict (Luke versus his father) was always an underlying threat as these men came together, but while it worked as a motivating factor for Luke, I found it difficult to believe. (From the beginning, Luke came across more as paranoid than cautious, which made it hard to suspend my disbelief.) Obviously people often behave irrationally, but I found it hard to believe that Luke, who has been tormented by his father for years, never actually takes any action to protect himself besides hiding.

On the other hand, unless Luke's father is insane (which his final scene would indicate he's not), I found his obsession with his son kind of extreme. He's always talking about how Luke will affect his career, but he keeps pushing Luke in ways that would make any rational person draw as much attention as possible so that people knew what a crazy asshat the father was. Why would a man who wants his son to keep quiet keep doing that?

To some degree I give leeway because obviously people react differently in different situations, but I just couldn't buy both of these men making such idiotic choices at the same time.

On the other hand, I love how Luke's father screws with Richard and Matthew, and I particularly like the small dramas that these men bring to the table as well and how they work together in the relationship and help Luke handle things.

The relationship between the three men was handled well, and while at times it was hard to see what the other two saw in Luke, I think it worked--mainly because it was from Luke's perspective and he found it difficult to understand what they saw in him too. There are glimpses where he is the perfect fit for one or both of them, and that made the relationship work. I also liked that all three men came together at once instead of a pair taking on a third. This seems to be the way a threesome would work best, although it's obviously the hardest to conjure. Parker did it well here.

I found the sex scenes to be kind of repetitious after a while, and also too many (which kind of go hand in hand). Anytime they have an argument, a bad day, or eat food, sex happens. While not all of the scenes are detailed, I still found myself rolling my eyes and saying, "Another sex scene." Also, although it is pointed out once, they tended to use sex to solve problems, or at least as a Band-Aid. I think if it wouldn't have happened so often, I probably wouldn't have minded, but the continuous "Disagreement-Fight-Sexy" pattern wore me out.

Finally, although I couldn't buy the conflict between father and son, I thought the final confrontation between them was very enjoyable. Not completely surprising, but I liked seeing a different part of the father and the resolution, along with the conversation Luke has with his mother after.

There are definitely positive parts of this book, but I found the overwhelming amount of supposedly mind-blowing sex weighed down the flow of the story, and I had a difficult time believing some of the actions of the antagonist and protagonist.
Posted by Unknown at 20:18