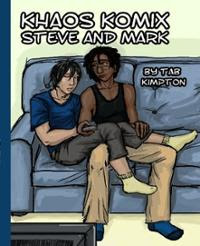 Khaos Komix by Tab Kimpton
Stars: 4/5*
*Because they’re free, I’d probably bump them up to 5 stars

Length: 8 stories at 51-97 comic book pages each
Blurb
This is a comic about gender and sexuality. It follows the lives of 8 main characters: Steve, Mark, Amber, Nay, Tom, Alex, Charlie and Jamie. It’s about them finding themselves, falling in love, lust and like and how hard they fight to get there.

This comic contains so many issues I can’t even really list them. Some of the things you may find here include: Gays, lesbians, those weird bisexuals everyone is talking about, faggotry, homophobia, transgender issues, dubious consent, body issues, abuse, hate and most important of all, a big old helping of LOVE. There’s a reason I called it Khaos.

Overall
I read five of the eight stories and I loved every one of them. (The only reason I didn’t read all was I was reading them all in one night and it was getting late. And they had female protags. I know, I have my preferences in romantic settings.)

Review
All the stories cover around the same period of time, with some going longer than others. Each story takes place from the protagonist’s perspective, so even when certain events are repeated, we’re given a new look at what was going on. Not only that, but the artist is obviously aware of the repeated events and doesn’t drag them out.

In many ways this is a standard high school/college romance story. But that’s sort of what makes it amazing. You know what you’re getting. And yet you get so much more. All of the stories tell the same general time period, but they also delve into the childhoods of the main cast, so we get so much more than if we just saw the events unfold as told.

The other great thing about these stories is that we have a variety of cast members. Yes, most are gay, but there are also heterosexual couples, MTF, FTM, gay, and ambivalent. They have good pasts and bad pasts. They have shitty parents and understanding parents. They have confused families and broken families. We get a little bit of everything.

Also, if you read the tales in order, they start off pretty light and slowly venture into darker and darker territory, but because you see where things are heading, you can avoid reading the darker tales if you want. I skipped over a few of the stories (Nay, Amber, and Charlie’s) but read through Jamie’s to get the full story on almost all the characters. It was pretty intense.

So these are fun, sometimes dark, often angsty stories that are definitely worth reading. Especially as they’re free and well done (with only a few typos in the text...but it’s a comic, so I’m more forgiving).

Be sure to check out my other reviews on my blog.
Posted by Unknown at 17:00