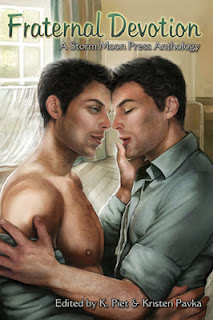 Length: 65,000 words
Blurb
When you pit knowledge against emotions, there's the no-man's land in between those two opposing forces where taboos lie. Incest is one of the untouchables, a taboo that even in alternative cultures is often still looked on negatively. But how can something that feels so right be wrong?

In Fraternal Devotion, the focus is on brotherly love—in every sense of the word. These are tales of love, lust, devotion, and passion as real as any other romance. Why should the fact that the two men are brothers take away from that? This collection may challenge your assumptions and beliefs, but may also melt your heart. Not to mention steam up your glasses.

Overall
Because of this anthology’s content, it will obviously not be for everyone. But if you’re reading this review, then you probably are interested enough to take the risk and dive in.

These stories definitely push the brotherhood button, and several are well done, while others left me cool. Just like every anthology, the mix is all based on the authors who write for it. For readers looking for these types of stories, I think it’s worth a gander and will be satisfying.

War and Peace and Brotherhood by DK Jernigan
3.5 stars
This story has many interesting elements in the plot, from the human evolution/disease conflict, the way it’s passed on, and the two brothers stuck in the center. I like the plot of this more than the sex between the two characters, and I like how Jernigan approaches and develops the two to what eventually happens in the end. Some parts of the conclusion feel unnecessarily rushed (or added and then rushed), but overall a satisfying read.

Analgesia by Alisha Steele
4 stars
One brother returns home, per his mother’s request, after being on tour with his band and the younger brother struggles to deal, as the last time they were really together, the older brother punched him in the face. Although the plot conventions aren’t fresh, the writing and eroticism of the characters work well together and made a strong dynamic as the two men come together. The two characters have a nice playful power struggle, and although the bits about analgesic and antiseptic seems a bit out of left field, the banter showed their relationship and kept the story light, sexy, and sweet.

Depression, Love, and Swimming Pools by Leigh Wilder
3 stars
While this story is grounded in reality, it has some elements that make it somewhat surreal. The role of stories and characters (and actors) play is an important theme throughout and creates an almost story within a story feel. The somewhat overly dramatic actions of the characters are odd, but fitting for the people and the environment they were raised in. This story may not be to everyone’s taste, but it’s worth a read.

On Clouds of Obsession Azalea Moone
2 stars
I had difficulty relating to the two main characters, who were very hot and cold to one another, and the events that unfolded just seemed a little strange. Matters were raised that didn’t really seem important and the whole impetus felt contrived. Although this story dealt the most with the realism of two brothers being together, it also resolved many of the issues too quickly.

On the Edge by SL Armstrong and K Piet
4.5 stars
Wow. This is a very powerful story that rips the heart out, holds it in the air a few seconds, then shoves it back in. It dissects the psychological aspects of incest for one of the partners and really looks at it how such a relationship would have to be handled in reality. I love how the characters struggle with one another and their emotions and how they handle their falling out and everything that comes after. It had my heart clenching in my chest.

Requested this book for review.
Posted by Unknown at 10:46