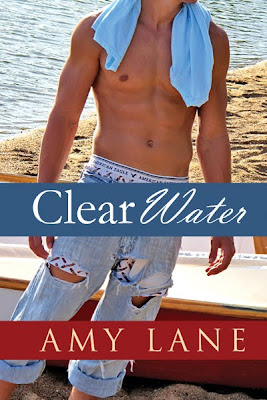 Length: 230 pages
Blurb
Meet Patrick Cleary: party boy, loser, and spaz. Patrick's been trying desperately to transform himself, and the results have been so spectacular, they've almost killed him. Meet Wes "Whiskey" Keenan: he's a field biologist wondering if it's time to settle down. When the worst day of Patrick's life ends with Whiskey saving it, Patrick and Whiskey find themselves sharing company and an impossibly small berth on the world's tackiest houseboat.

Patrick needs to get his life together-and Whiskey wants to help-but Patrick is not entirely convinced it's doable. He's pretty sure he's a freak of nature. But Whiskey, who works with real freaks of nature, thinks all Patrick needs is a little help to see the absolute beauty inside his spastic self, and Whiskey is all about volunteering. Between anomalous frogs, a homicidal ex-boyfriend, and Patrick's own hangups, Whiskey's going to need all of his patience and Patrick's going to need to find the best of himself before these two men ever see clear water.

Overall
It took me two reads to really appreciate this book. My first read I was in love with the beginning and mediocre on the ending, which felt seperate from the rest of the novel, initially. However, on my second read through, while the end is still very different from the beginning, they felt more like they belonged together and the story naturally flowed from one into the other.

But to me this story isn't really about the plot, it's about the characters. They take the stage and steal the spotlight just by being themselves and going through their everyday--and not so everyday--actions. The good guys may not be perfect, but they are still obviously the good guys and work hard to do what is right.

Definitely worth a read, especially if you want something happy and hopeful.

Strengths
The characters really captured me. Patrick, who has ADHD and is struggling to get his life together, is flexi-bendy and uses yoga when he can't take his meds. He's been told he's an idiot and a failure for pretty much his entire life and has a chronic case of the "I'm sorry"s, which is heart-breaking sometimes. Other times it just makes you want to wrap him in your arms and take him home with you. But it's okay, that's what Whiskey is there for.

Whiskey is a down-to-earth scientist who has spent the last ten years trying to find home without knowing what he was looking for. He's patient and more patient and good at thinking on his feet but not rushing his thoughts either. The perfect balance to Patrick, whose brain to mouth connection is short, even on the meds.

They are both rounded out by Fly Bait, who is caustic, rough and has a dry sense of humor. In some ways she's a "classic dyke" (in a completely unoffensive way), but she's definitely Whiskey's best friend. She's fun, but not silly, and is a good literary tool for helping get the boys to take their respective sticks out of their asses.

There are a few other side characters that add to the mix, but I'll refrain, lest I give something away.

Lane captured Patrick's ADHD perfectly and had some great examples for Patrick to use to describe it, which felt almost educational for those not familiar with the disorder. I also like the approach she took with comparing Patrick's ADHD to the anomolies in the frogs without going too much into the correlation of pesticides and ADHD in humans. Educational without preaching and everything was balanced out by Whiskey, who sees nothing wrong with taking meds if you need them (since some of the greatest minds need them).

The dynamic between the two main characters as Patrick acts like a spaz and Whiskey patiently helps him handle it is what made this book for me, and if you enjoy good character dynamic/interaction, I think you'll enjoy it just as much.

Weaknesses
The end, encompassing both the major climactic action and the falling action, didn't sit right with me initially. The first felt extraordinary, considering the rest of the story, and the latter felt like it worked too hard to wrap everything up perfectly. But I experienced everything differently in my second read. While the climax still felt a little extraordinary after all the frog counting, it definitely played an important role in show Patrick who he was and how he was better than he thought. The falling action, while perhaps seeming a little too perfect, does work for this book and is fitting for the genre. Also, it's not so over the top HEA that it causes cavities and tummy aches.

Requested this book for review.
Posted by Unknown at 19:34