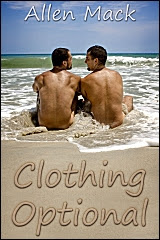 Length: 5,200 words
Blurb
Jim convinces his partner Brad to spend a day at a newly “liberated” beach -- meaning nudity is permitted within designated bounds. Brad overcomes his shyness and agrees to go, on the lookout for “watchers” the whole time.

The couple meets others like themselves, some interesting folks, some interested in only one thing. Their little excursion turns out to be far from the quiet, restful vacation Jim originally planned. By the end of the day, the sun isn’t the only thing heating up the beach!

Overall
A slice of life short that peeks into the life of Jim and Brad, long-time partners who are venturing into something new! This is definitely a nice, sweet story, and while there isn’t much to it, it’s still enjoyable for what it is.

Review
What I loved most about this story was that even though it took place on a nude beach, the story wasn’t sexual. Yes, there were sexual allusions and the two main characters are obviously together, but nudity didn’t equate to sex. It was refreshing to read something that wasn’t just a hot little number. (Not that those aren’t enjoyable too!)

We only really get a glimpse of these two men, which made me want to see more of them. Brad used to be in the clergy, which in itself brings up plenty of questions. While they may not have a novel-length book in their story, it definitely feels like they have a tale to be told. While I liked what we saw, I would like to see more.

There is a definite sense of fun and playfulness between the two men, which was a strength of the story. However, their interactions with other couples was hit or miss with me. The first couple felt good and fine, but the second two pairs felt like forced interactions to cause drama (the final couple most of all). It wasn’t a big deal, but it made me scrunch my nose a tad.

Received this book for review.
Posted by Unknown at 17:00