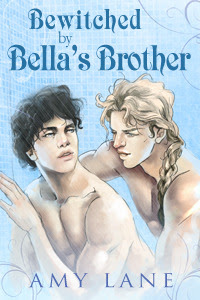 Length: 192 pages
Blurb
Sebastian Craig and Isabella Bryne have been best friends for five years in the Neverland of academia, and that's where they're planning to stay. So when Bella's brother, Asa, offers them a rent-free summer in his gorgeous home before they move to their next college and degree, they jump at the chance. It looks like a good deal at first... but there's more to Asa than meets the eye, and Sebastian finds himself suddenly hip-deep in complicated, grown-up problems and the frightening, bemusing prospect of having a family that will miss him when he's gone.

When the best summer of his life finally ends, Sebastian has to make a difficult decision between staying in perpetual childhood forever, and facing adulthood—with all of its joys and fears. It seems that when Sebastian and Bella came up with a master plan for the future, they didn't count on Sebastian being bewitched by Bella's brother.

Overall
A charmingly sweet, sometimes silly, exploration of serious topics such as divorce, sexuality, family, and growing up.

Review
I'm not sure if it's the mood I was in or just the laidback storyline, but it took me two reads to really sink into this one. My first read, I enjoyed it, but it didn't grab me by the heartstring (or any other anatomical part) like Lane's books normally do. I gave it a second read because I didn't trust my post-accident brain to know what it likes.

This is a mellow story, despite a fair amount of drama happening all around. Even when events were occurring that would normally have me snotting up like a five-year-old, I didn’t cry. This may be because the story was just kind of...happy. Even when shit was going down I felt closer to happiness than in other stories. This isn’t a bad thing, but it makes for a less dramatic reading, at least for me.

It also made the story extremely accessible and comforting. It’s one I can imagine reading again and again, because it just put me in a content, happy place. It’s like the hoodie that doesn’t look like anything special, but I wear all the time.

The descriptions of the room and the house were gorgeous and made me insanely jealous. But even though money was obviously not an issue for Asa, this didn’t feel like a ‘kept boy’ story either. While Sebastian had lots of emotional growing he needed to do, he also was pivotal in helping Asa grow (in a very different way). There was balance in the relationship.

The Bryne family is amazing, and there is a powerful contrast between their presence in Sebastian’s life and Sebastian’s own family’s absence. It’s one of those things that just fits so well without having to be pointed out. (Except by annoying reviewers. :)

While this is a well-written story, I wouldn’t pin it as one of Lane’s finest, although it has a multitude of good qualities. As I said before, it’s comfortable, not fancy. I almost hate to score it so low just because it didn’t make me an emotional wreck. I loved it and I look forward to curling up with it again later. It just didn’t blow me out of the water.
Posted by Unknown at 19:20