The Gentlemen’s Parlor: Room of Chains by Geoffrey Knight 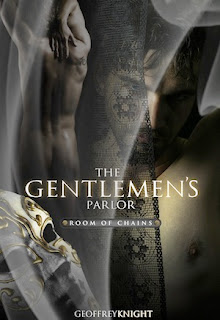 The Gentlemen’s Parlor: Room of Chains by Geoffrey Knight
Stars: 2.5/5

Length: 15,500 (54 pages)
Blurb
Dr. Darius inhaled on his cigar and a pillow of smoke drifted from his lips. "This place, the Parlor, it's about more than just money. The Parlor is somewhat... unique. The vast majority of people in the outside world—those beyond the walls of this mansion—would be offended and outraged by what goes on here. But those within these walls, they come to feel alive. They come to be loved, to feel that they belong to something... or someone. They come to find themselves. They come to heal... or be healed. In the Gentlemen's Parlor, nothing and nobody is judged."

Gather your secrets, slip on your mask, leave your inhibitions at the door...

Overall
A short story that offers more promise than it gives, but hopefully is just an opening into the world of the Gentlemen’s Parlor.

Review
For me, this story felt like a teenager, awkwardly stuck between the innocence of youth and the sexuality of adulthood. The two men of the tale are fairly pure and innocent, as is their love, but they are surrounded by sex and lust. This in itself isn’t a bad thing, as it brings into stark contrast the two worlds and the difference between love and lust, but it also gives a sense of a gangly teen who can’t quite control his limbs.

The blurb seems to promise a high level of sexuality, which in some ways is given, but the juxtaposition of sexuality and the two main men seems at odds at one another. While I loved the role Dr. Darius played, both as the buyer and as a plot device, very little else drew me into the story. The characters were nice young men who relied on each other, but while I liked them, I never really thoroughly connected. The young men are still boys in many ways and cannot satisfy the promised sensuality that the club seems to offer.

That being said, the story was written well and paced properly. I think this short opens up the world of the Gentlemen’s Parlor and provides good footing for other stories to be explored, specifically Dr. Darius’ role in it. While every story (in what seems to be preparing for a series) would toe the line between pure smut and something more, I’d be interested in seeing where this leads.

Received this book for review.
Posted by Unknown at 20:11