With Abandon (With or Without, #4) by JL Langley 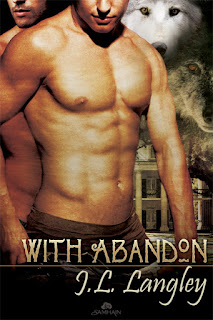 Length: 206 pages
Blurb
Love was never part of his plan…until it pounced.

As heir to an old and proud heritage, Aubrey Reynolds works and lives for his family, his employees and his pack. Agreeing to watch after a visiting werewolf is no big deal—until he discovers the newcomer is his mate. His very male mate…which is a very big deal, indeed. Revealing his sexuality was never part of Aubrey’s well-ordered life plan.

Much as he loved caring for his eight younger brothers, Matt Mahihkan knows it’s time to grab the opportunity to attend college in Atlanta. Realizing Aubrey is his mate should have been a delightful experience…except Aubrey treats him more like a dirty little secret than a lover. Yet Matt is a patient man. Aubrey can’t stay in the closet forever. Can he?

In time, they settle into a comfortable, if complicated, routine. Until a rogue werewolf with an axe to grind forces Aubrey to add to the wedge of secrets driving him and Matt apart, leaving Matt exposed to danger…and Aubrey forced to choose between love and duty.

Overall
Nothing in this story really jumped out at me as being horrible and irredeemable, but nothing inspired awe, either. I enjoyed it and think most readers will too, even if they may want to smack Aubrey (and Matt, wondering why he's OK with some of the stuff Aubrey pulls).

There were elements of the story that had me raising a brow, wondering why they were included, but in general it was a cohesive (although slightly branching) story that involves wolf shifters and the struggles of finding your mate.

Review
The story started pretty strong with a slight mislead that was cute, and a nice conflict of character personality. Aubrey wants sexsexsex and Matt wants to go slow. Both characters also have external stresses in their lives, whether it's work or family, that influence their actions throughout. There are also outside characters that are interesting and obviously placed to play a role later in the story, which builds a nice anticipation for what is to come.

I was a little disappointed for what happened though. I liked where some characters went, but the drama involved seemed a little over the top and unnecessarily traumatic. Langley definitely re-uses a specific course of drama, even if it does have a new spin on it.

One of my concerns going into this book was Aubrey. I'd read plenty of reviews announcing him as an unredeemed prick, and I was terrified I was going to hate him the entire time. While he's not my favorite character, and he is a prick, he does redeem himself slightly. He obviously cares for Matt, and while he doesn't really evolve as a character (most things just fall neatly in his lap), he does at least realize what is important and make good decisions by the end.

One thing that confused me was Aubrey's parents. Their initial reaction made no sense to me—or maybe their logic behind it. It was probably my biggest peeve, because if they had confronted the issue head-on, Aubrey would have worried less, I'm sure, and Matt would have had a different relationship. As it were, it felt the parents reacted the way they did simply because the story needed to continue moving along. On the other hand, I love Gadget's reaction, how it was balanced out by Bambi's reaction, and the love that exudes from Matt's household.

Langley set this up to open multiple different future stories (not including the one for Sterling that some fans are waiting for), and I'd like to hear those stories, although I'm not chomping at the bit. Langley's stories are good, enjoyable, but were better enjoyed when I wasn't waist-deep in the genre. They are an excellent introduction—a taste test, if you would :)
Posted by Unknown at 19:03