Men of Smithfield: Seth and David by LB Gregg 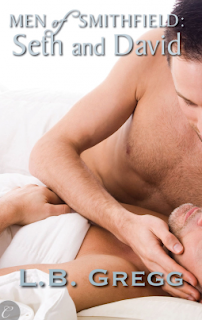 Men of Smithfield: Seth and David by LB Gregg
Stars: 4/5

I wasn't impressed that I had to get my weekly massage from a guy with a toe ring. But when I discovered David Cooke's skills as a masseur were literally orgasmic, I couldn't stop thinking about him and his amazing hands, day and night. Especially at night.

He's full of surprises. And despite my bad behavior, David's just as eager to explore this chemistry between us. Turns out, there's a lot more to him than hemp pants and tattoos. If he's so wrong for me, why does being with him feel so right?

Overall
Despite Seth being a jerk in the beginning, I really enjoyed this story. I normally hate main character jerks who get the guy, but here it worked, because even though Seth is a jerk, he also tries to do the right thing, and as we see, hasn't always been a jerk. And in many ways he isn't a jerk...just a little closed-minded.

It's a sweet little story that's a mix of serious emotional topics and humor. And some sexy times. Seth and David definitely have physical chemistry, and the clash between that and their emotional involvement is nice.

I'd call this story a palate cleanser, as it is enjoyable and good, but doesn't draw the reader into the drama so far that it's overwhelming.

Review
There is some drama in the non-romantic parts of the plot, which I found to be the weakest parts of the story, but the drama between the lead men was perfectly enjoyable. David is a good, nice guy (who may be a little spastic at times), Seth is a surface jerk (who has been using one line of thinking so long it's habit). Seth has some growing to do, and David is the catalyst. They are a nice mix and the end is completely satisfying.

Also, for people who like stories with kids, there are two here, but for the rest of us, those kids, while playing an important, focal role, are old enough not to be too needy, and they don't overwhelm the story. It was a nice balance, considering the situation.

I don't have much to say about this one. It was good, I enjoyed the story (even the nonromantic elements of the plot that I found to mediocre), and I really liked the characters, especially Seth, who gets to grow and transform over a short number of pages. A nice, pleasant read.

Received this book for review.
Posted by Unknown at 07:07