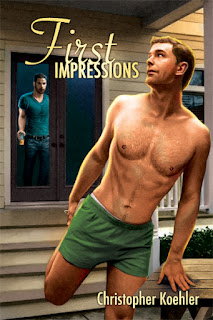 Length: 300 pages
Blurb
The first time Henry Hughes and Cameron Jameson meet, it’s an unmitigated disaster. Cameron reminds Henry of all he left behind when he stopped making adult films, and he cruelly rejects Cameron. When Cameron discovers Henry’s porno-thespian past, he assumes he’s dodged a bullet.

But circumstances continue to throw the two together. Though the physical attraction between them grows, they cling to first impressions, even as a slow dance reveals just how good they could be.

Henry finally realizes how wrong he was, but Cameron can’t cope with “sleeping with the enemy.” It will take a confrontation for Cameron to realize just how wrong he’s been, but unfortunately, he may have lost his chance.

Overall
This novel will not be for everyone, or even maybe for most people. While the writing itself isn't bad, the characters and the plot leave plenty to be desired. The one main character especially rubbed me the wrong way, but that may be personal preference. It's possible this was meant to be a more humorous story, and some may find it that way, but my dislike of the one main character and his friends, along with the inconsistency of how the character portrayals, left me not laughing as the story fell flat.

That said, this wasn't a hard book to read, either. It has a good pace, and there is almost always something happening that keeps things moving. For readers who don't mind ridiculous characters and who like the 'big misunderstanding' trope, this may be just the thing.

Review
The biggest weaknesses in this book stem from the characters. My initial thoughts on Cameron weren't that bad, although I questioned his taste in friends. V+T are irresponsible, loose cannons who think everything is a joke. They overreact to simple situations, are pushy and flamboyant, and got under my skin. At least for the first half. In the latter part of the book, they become more responsible, only retaining fragments of themselves, while Cameron becomes the reckless one.

In general, Cameron's first appearance presents him as a responsible adult who is surrounded by irresponsible friends (aside from one of them) and who made decisions to be independent that have put him in the situation he's in now. I liked the Cameron we were given, but as the story unfolds, he changes and the perspective about him changes, which could have been done on purpose by the author to show that what we first saw wasn’t all there was to him, but in general made me dislike him as a character and made me question whether we were finding out new facts or if the old facts were changing.

The general plot and back and forth of the characters had some interesting elements, but in general it dragged out the telling. Many things kept happening, getting in the way of the two main characters, which meant for a quickly paced book, but I lacked motivation to really care about the characters and their end results. So while the multiple "But wait, another twist!" events kept the story moving, they only helped with the enjoyment slightly.

It's an easy story to read, and while there was plenty I didn't like, it was quick, making it oddly enjoyable. It's like a cheesy, sorta bad movie that makes you roll your eyes and laugh once and a while. Not something I'd outright recommend, but will probably be to some people's tastes.

Requested this book for review.
Be sure to check out my other reviews on my blog.
Posted by Unknown at 19:49