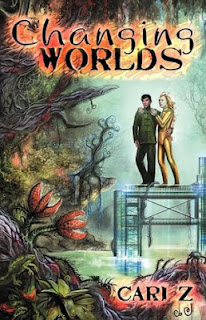 Length: 71,000 words
Blurb
In this sequel to Cari Z's Opening Worlds, former starship captain Jason Kim travels to Perelan, the homeworld of his lover, Ferran, to start a life together. The ruling council of the Perels have allowed this unconventional union to continue in the hopes of strengthening relations between themselves and the humans. And while Ferran's family welcome Jason with open arms, not all of the other major families are as pleased. The arrival of an outsider to their insular, subterranean world challenges the traditions of centuries.

Tensions soar as old rivalries are rekindled in the wake of Jason and Ferran's relationship. Inevitably, something snaps. Jason and Ferran soon find themselves literally fighting for their lives when xenophobic anger pushes things beyond the breaking point. Only their devotion to one another can see them through, but a ghost from Jason's past threatens even that. With Perelan on the brink of civil war, Jason and Ferran must find a way to stand together in the face of chaos and to change the world on their own terms before it tears itself apart.

Overall
Having enjoyed the short story that this novel expands on, I was excited to hear that Ferran and Jason's story continued. And, for the benefit of people who hadn't read the first story, it's included in the beginning of the novel. (Two for the price of one!) I had already read it, but I re-read it, despite everything being explained in the novel itself (for those who choose to skip reading or re-reading the short). I was reminded how much I enjoyed the short, and with its happy ending, it was almost difficult to begin the novel, knowing there would be challenges in their future.

But I did, and I'm glad I did. A majority of the story is rather calm, action-wise, but it's tense in the relationship and political quandaries that arise. The last few chapters are incredibly compelling, and I eagerly ate through them. A great exploration of different cultures, xenophobia, and what really is the last great frontier--love. Oh, I mean space.

Review
I'm going to lead with what is probably the two weakest points of the novel, and they are pretty flimsy weak points: One, if you just re-read the short story which comes before the novel, then all the descriptive bits regarding the short story and explaining what happened seem unnecessary. Very minor and barely worth mentioning.

The second is that I saw some very minor plot holes, that weren't really holes but thin sections of the fabric. Some actions, while they had a good reason behind it, didn't make sense later. However, those actions weren't the main focus of the end plot, so it didn't detract from the story, but did create a slight "Wait--what?" moment for me as I read.

That being said, I really enjoyed this novel. The characters were well-fleshed out and came in a variety of flavors, from the stoic Penelope to the goofy doctor, to the main characters, who struggle with their differences about how life should be. While the reader will undoubtedly be more familiar with Jason's perspective and traditions, it was nice to see he wasn't always in the right in their struggle of differences, and most times they found a middle ground between them. Regardless if you agree with the culture Jason has to adjust to, I appreciated the sense of balance, that he had to respect their traditions, but they also had to understand that things can change. It was very positive, and also the greatest points of conflict throughout the plot.

Changing Worlds explores multiple facets of facing a new and different culture, such as language barriers (although technology does make that easier!), cultural differences, xenophobia, and the general environmental differences. For me, this story did all those things right, creating an environment (both socially and physically) that wasn't deadly, but wasn't all that healthy for Jason either. This plays a part multiple times in the story as Jason has to survive the politics and environment and be given what little concessions the Council of Matriarchs will allow for him to be an equal.

The progress of all the characters was interesting, not just the main two. There are side characters that grow, or that Jason's relationship grows with, adding a compelling element to the story telling, since the reader doesn't just care about the leading men, but a large extended family.However, even though we care about them, the focus never gets deterred from the primary story, and in the end the threads all pull together nicely.

I'd recommend this to all readers--sci-fi fans or not.

Requested this book for review.
Posted by Unknown at 21:09