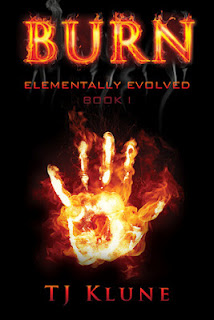 Length: 370 pages
Blurb
Book One of the Elementally Evolved series

Set in a world that closely resembles our own, Burn is a story of redemption and betrayal, of family and sacrifice, which leads to the greatest question of all: how far would you go to save the ones you love?

Fifteen years ago, Felix Paracel killed his mother with fire that shot from his hands. Since then, he has hidden from forces bent on exploiting him and his fire and wind Elemental abilities. But Felix’s world is about to change, because he is Findo Unum—the Split One—and his coming has been foretold for generations.

Though Felix’s arrival brings great joy to the Elemental world, it also heralds a coming darkness. No one knows this better than Seven, the mysterious man who rescued Felix from that horrible fire years ago and then disappeared... who now has returned to claim what’s rightfully his: Felix’s heart. But even as Felix begins to trust Seven and his feelings about his place in the world, the darkness reveals itself, bringing consequences no one could have predicted.

Overall
There are elements of Burn that I really enjoyed, and other pieces that left me struggling to finish the novel. First off, I wouldn't count this story as a romance, because while there is a strong romantic/sexual element, it's really not the overwhelming focus of the story, especially the latter half. Second, this tale suffers from a loquacious narrator, which from the two books I've read by Klune, this seems to be the author's style. I had difficulty connecting to the narrator and the world in general, although I wanted the narrator and his team to win.

For readers who need absolute closure in their books, beware that this is "Burn, Elementally Evolved #1," meaning that there is an on-going story. I found the lack of closure frustrating, although understandable.

I wish I had enjoyed this novel more, as I think the concept is interesting and would like to know it's ultimate conclusion, but the style of writing that worked so well in Otter, Bear, and The Kid failed to keep my interest here and ultimately made this something that I would have a hard time finding the time (my so-limited time) to read.

Review
Felix, our narrator, is selfish and a touch whiney, although in some/most instances it's understandable. He's not my preferred narrator type, especially with a close first person point of view. He toes the line (hard) of being a Gary Stu (male equivalent of Mary Sue). However, he's also understandably suspicious and distrustful, since everyone, from his father to his lover, lies to him or keeps secrets. He was hard for me to like, but he was also hard to hate.

The plot line was interesting, pulling aspects from familiar stories like X-Men and Lord of the Rings, but also including many original elements as well. The environment is similar to those mutants we know and love, where people with special powers are persecuted and there is the chance of laws coming into effect that will tag them all. Felix, unbeknownst to him, is a kind of savior to Elementals and is pulled into an underground society in order to receive his training and fulfill a prophecy. Yes, some of the story is been-there, done-that, but it went in some interesting directions, which kept me from saying, "Yeah, I've seen this before."

There is a large cast of characters, and it's hard to trust anyone, and those you do trust could wind up stabbing you in the back. It's painful for the main character and it's painful to read, but it is realistic, and the raw emotions that Felix forms from his interactions (no matter how irrational some of his behaviors are), do make sense. At the end, I found myself connecting to him as he struggled through the more difficult parts of the story, and I think part of my discomfort with the novel stems from the fact that Felix doesn’t know who he can trust and he can’t really trust anyone, which I don’t like feeling, and which of course I felt every step of the way. It was well done to evoke that emotion from me, but that doesn’t mean I need to like it. :)

About two-thirds of the way through, I got stuck. I was sick of the politics within the underground community, I was tired of Felix's whining, and the internal dialogue was killing the pacing for me. Several months later I finally opened it up again, but instead of thoroughly reading, I did a skimming finish. The verbosity never died out, but the plot picked up and gained steam, to the point where I kept looking at how much I had left and at what was happening and wondered how they could possibly end everything in time.

The answer was they couldn't. Although the conclusion is a sorta ending, if the tale ended there I would be terribly dissatisfied. Knowing this is part of a series and will be continued keeps me from grading this harshly (I'm out of practice of reading series and feeling like I'm going to rip my hair out waiting for the next one). It's still one heck of a place to end, and readers who need closure should wait until the next book--at least--is out, although I'm not certain I'll read it.

Finally, the cover is lovely, stark and eye catching. If I saw this on a bookshelf, I’d pick it up, which is the purpose of the cover! It’s fitting for the story and further shows that this isn’t your typical romance novel.

Requested this book for review.
Posted by Unknown at 21:14