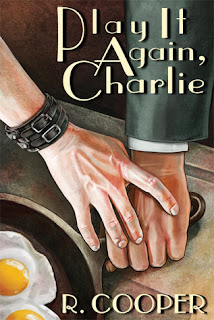 Length: 370 pages
Blurb
After an accident left him broken in body and spirit, Charlie Howard retired from the police force to teach at a community college. Life has taught him that he’s unlikely to get what he wants, so he’s stopped asking. Instead, he hides from the world in the apartment complex he manages. After all, no one can leave him if he doesn’t let anyone in.

Will, a sexy, classic-film-loving twink, moves into the apartment across from him and—to Charlie’s surprise—makes it clear that he’d like nothing more than to hole up with Charlie and get kinky. Will has no problem expressing what he wants in bed or out of it, but he’s never dated anyone long-term, and Charlie isn’t sure Will’s ready for anything serious.

Charlie is a serious kind of guy. He wants Will and everything a relationship could mean, even if he doesn’t have any experience in that scene—even if that makes him vulnerable. As they grow closer, Charlie realizes that it’s time to start asking for what he wants, and if he wants to be happy, he’ll have to risk everything and ask Will to stay

Overall
This book will not be for everyone, and despite really enjoying it, I did struggle through it. The writing style is a little different and pretty much drags out every scene to within an inch of its life, making for a very slow-paced story. In addition, the entire basis is structured around two men whose biggest problem is their complete lack of communication and the misunderstanding that gulfs between them. Still, I couldn't give up on this story, and while it wasn't an easy read, I really did like it. Not a popcorn cruncher by any standard, but for some (if you can read an excerpt and enjoy it), it will satisfy.

Review
Almost every conversation between Will and Charlie is a confusion, to the point that it's almost a miracle they hook up--or are interested in each other at all. Will talks in movie quotes half the time, and while the reader will quickly and easily pick up on his interest in Charlie, our dear, sweet, stupid narrator will take a little longer for any type of advancement. Even once they've fallen into bed (err, against the door), Charlie thinks Will is just after a good time and some satisfaction for his "Daddy issues." The reader knows better, but Charlie is a little (OK, a lot) tentative after his last 'relationship' and is unable to believe sexy Will would be interested in him. So Charlie doesn't get Will, and Charlie only ever says half of what he's thinking (more like one-eighth), so Will is just as confused. They spend over 300 pages misunderstanding one another, although their relationship does advance over the course of the confusion.

Charlie will strike true to a number of people, especially those who internally react to everything around them, but barely verbally react. Part of this is from Charlie's familial presentation as "the man" and part is from the under-described relationship with Mark. Also, Charlie is just one of those types. Of course he's faced with Will, who wears his heart on his sleeve, but doesn't come with a manual...or at least Charlie can't trust the translation he has. Their back and forth, painfully obvious feelings for one another may drive some to insanity, but others will enjoy their stumbling, plodding relationship.

When Charlie finally realizes he has to verbalize his feelings for Will, the story picks up and comes together nicely. The breaking point of the story is a little brow raising, since it's hard to understand Charlie's hesitation in revealing his family since the reader is never shown any men running from the experience of meeting his family. But much of the story suffers from the same struggles that the relationship does--Charlie doesn't share. Not necessarily a bad thing, but much like Will, the reader will be frustrated.

Despite this review sounding nothing but negative, I enjoyed the slow progression, the development of their relationship, and in some twisted sort of way, I liked the painful, drawn out wait the author made me go through to get to the end. In some ways I feel this needed a heavy editing hand, especially to appeal to a modern audience, but in some ways the unique style is what separates this book from the other similar stories.

What originally caught my eye with this novel was the cover, which was simple and domestic (and fitting). It gives away very little, which in itself made me curious, and the focus on the two hands and cooking were interesting choices and drew me in.

For the curious, there is some bondage/domination in the story, something Will wants and something Charlie is hesitant to give--although he can't help giving in to Will's need. The exploration was well handled, although again, Charlie's resistance to share his past--even with the reader--makes some elements of his life difficult to understand. Still, the dominance works, and despite "Daddy" not being my thing, I like how Charlie handles it and how it works in their relationship.

Requested this book for review.
Posted by Unknown at 20:46