Handle With Care by Josephine Myles 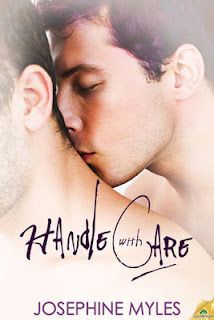 Ben Lethbridge doesn’t have many vices left. After raising his little sister to adulthood, he wasted no time making up for the youth he lost to responsible parenting. Two years of partying it up—and ignoring his diabetes—has left him tethered to a home dialysis regimen.

He can do his job from his flat, fortunately, but most of his favourite things are forbidden. Except for DVD porn…and fantasizing over Ollie, the gorgeous, purple-haired skateboarder who delivers it.

Their banter is the highlight of Ben’s lonely day, but his illness-ravaged body is the cruel reality that prevents him from believing they’ll do anything more than flirt. Not to mention the age gap. Still, Ben figures there’s no harm in sprucing himself up a bit.

Then one day, a package accidentally splits open, revealing Ben’s dirty little secret…and an unexpected connection that leaves him wondering if he’s been reading Ollie wrong all this time. There’s only one way to find out: risk showing Ollie every last scar. And hope “far from perfect” is good enough for a chance at love.

Overall
Sweet and enjoyable, and definitely well researched, but I had trouble really sinking into this one. The blurb mainly focuses on the first 20% of the story, which left me surprised at everything else that happens. The characters were easy to empathize with, and I liked where Myles took them and the different issues she explored. Worth picking up, especially for readers who want a slightly different taste of a relationship.

Review
Going into this story, I had high hopes, as I'd heard nothing but good things, and while I enjoyed it, I wasn't blown away. All the positive things other reviewers pointed out are what I enjoyed, but something was missing to really make this story pop. Both characters were likable, but neither felt particularly inspired--although admittedly it could be that I've just read a rash of similar types recently. Despite my overall blasé review, I did enjoy the story, I just went in with higher expectations than was delivered.

One of my favorite elements of the story was that it touched upon a lot of topics that aren't brought up in romance--or rarely are. The biggest obviously is Ben's diabetes and kidney failure and all the resulting medical drama. I liked the focus on what he could and couldn't eat and how he would be on meds for the rest of his life if he did get the organs he needed. Ben's struggle with his attractiveness--not because he's unattractive, but because he feels unattractive due to his illness and the medicine helping him to live--and how Ollie and Ben's sister confront that.

Ollie is brilliant. He's young and a little stupid, but he's also brilliant. He's a bit over-emotional, but it's more a matter of not knowing how to react in a new situation rather than being a drama queen. I love that he has a rough history that affects him but doesn't stop him. I worried at times that he had a bit of a medical fetish, what with his tube fondling, but that seemed to be more an acceptance thing than a fetish thing (which relieved me!).

I want to stop by Ollie's cafe and grab a drink and I love how it's so much more mature than it appears at first, which is totally Ollie. Along those lines, I love the double play of names for Ollie and the cafe and what that means for both of them.

Fun, cute and sweet, worth giving a chance and the read but not amazing.
Posted by Unknown at 19:10