The Sartorialist by Cecilia Ryan 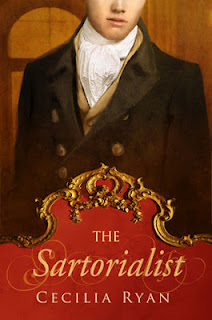 The Sartorialist by Cecilia Ryan
Stars: 3.5/5

Length: 66 pages
Blurb
When royal sartorial adviser Beau Brummell meets a pretty soldier at a ball full of people who have begun to bore him, he's only thinking of a brief affair and the opportunity to prove that clothes make the man. When Toby turns out to be not only beautiful but kind and a generous lover, Beau finds himself falling fast. Though previously happy to let him have his fun, the jealous Prince Regent issues an ultimatum: Toby must return to France or risk being charged with treason. Knowing Toby is unlikely to survive, Beau begins a downward spiral into depression and debt. Surely he and Toby will never meet again….

Overall
Written in a classical form, this novella may come across awkward to the modern reader, but those who can go beyond the writing style will find a charming story rife with historical information. My initial impression at the half-way mark was not too positive, but as the story unfolded and came to a head (and I grew comfortable with the format and style), I found myself hoping Beau would find his happy ending. This piece won't be for every reader, but I definitely think it's one that's worth giving a chance.

I probably would have given the story a 3-star rating, but the ending got to me, so I bumped it up. I'm such a sucker sometimes.

Strengths
This is one of those "making history interesting" stories where the tale that's told is more interesting than what we would be told in History class. While obvious liberties have been taken with details, at the end the author provides a bare-bones account of what actually happened and provides an idea of how the story grew up around that. Beau's story is much happier in fiction than was likely in history.

While I didn't enjoy the writing style initially and it never really won me over, the author used it consistently, never wavered, and did an excellent job telling the story using that style. It definitely fits the time period and the cover.

I didn't particularly like the narrator in the beginning, but by the end I was rapidly reading to get to his happy ending. I mean, it's a romance, it had to have a happy ending, right? Right? Either way, some where along the way I fell for the poor sod and his close friend, and I loved where the main romantic relationship and where the close friendship went. Yep, I'm a sap.

Weaknesses
The writing style is first person and takes a more classical form, like the era the story is from, which is a unique choice and didn't sit with me well at first, especially for the first scene which had royalty speaking almost crudely. Eventually it grew on me, although I wouldn't go out of my way to read many in this style. The style keeps the story from getting too in depth, since everything is narrated to the reader as if sitting in the same room, which diminishes some elements that I normally enjoy in a romance novel. However, I still found myself moved by the writing, so the chosen style didn't ruin the story either.

Requested this book for review.
Posted by Unknown at 20:38