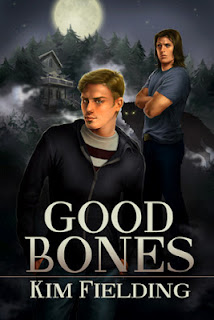 Length: 200 pages
Blurb
Skinny, quiet hipster Dylan Warner was the kind of guy other men barely glanced at until an evening’s indiscretion with a handsome stranger turned him into a werewolf. Now, despite a slightly hairy handicap, he just wants to live an ordinary—if lonely—life as an architect. He tries to keep his wild impulses in check, but after one too many close calls, Dylan gives up his urban life and moves to the country, where he will be less likely to harm someone else. His new home is a dilapidated but promising house that comes with a former Christmas tree farm and a solitary neighbor: sexy, rustic Chris Nock.

Dylan hires Chris to help him renovate the farmhouse and quickly discovers his assumptions about his neighbor are inaccurate—and that he’d very much like Chris to become a permanent fixture in his life as well as his home. Between proving himself to his boss, coping with the seductive lure of his dangerous ex-lover, and his limited romantic experience, Dylan finds it hard enough to express himself—how can he bring up his monthly urge to howl at the moon?

Overall
I started this novel in the mindset of "Oh, look, another werewolf story." There may have been a slice of "A were story in the woods. That's new. /sarcasm" But one of my friends recommended it so I slid it in the queue and when I needed to read something that I had low expectations for, it was the winner. So yes, I went it a little jaded.

I was surprised to enjoy this as much as I did. While in some ways it's the classic werewolf romance story (which is like taking a choose your own adventure), it also has its own plucky attitude that adds the certain something to let the story flourish. The characters clash in a way that made me think I wouldn't enjoy them together, but in the end it was their very different style of relationship that helped this from becoming same-old, same-old.

Strengths
As I said, the main concepts of the story weren't brand-spanking new, but the way everything was handled, the story-telling aspects made the story come to life in a funny, tender way. For the most part it still didn't blow me away, but the ending was icing on the cake, leaving me with a slight euphoria.

The characters aren't the pleasant bunch I normally find in romance novels. While the narrator is more along the lines of squishy that I was used to, his match is a rough-around-the-edges, slightly caustic man who is more hick than he is handsome. This contrast made me wary of their coming together, but by the end the author made the pair work for me and, if given a chance, I think for most readers.

Part of my enjoyment probably falls along the veins of both men being broken puppies, at least a little. They aren't angst-mongers about it, but both their issues are raised plot wise and relationship wise.

Finally, I love that Richard and Dylan have such juvenile nicknames for each other. It's such a tiny thing, but it made me roll my eyes--and snicker.

Weaknesses
I found some of Chris' emotional moments to be almost swooning-woman in nature, which is compounded by being rescued twice by Dylan. Part of this could just be society brainwashing me into thinking men have to be tough, but part of me was a little taken aback by this strong, tough man's reactions. However, considering Chris' upbringing and how he normally puts up a tough front, when he's given love and kindness, it makes sense (to an extent) that he's overwhelmed. So in this way his reactions seem reasonable, but I still felt I should mention it.

Requested this book for review.
Posted by Unknown at 21:03