A+E 4Ever by ilike merey 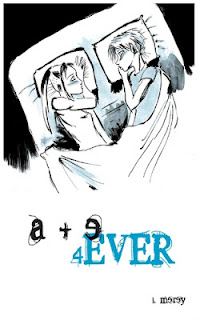 Length: 214 pages
Blurb
Asher Machnik is a teenage boy cursed with a beautiful androgynous face. Guys punch him, girls slag him and by high school he's developed an intense fear of being touched. Art remains his only escape from an otherwise emotionally empty life. Eulalie Mason is the lonely, tough-talking dyke from school who befriends Ash. The only one to see and accept all of his sides as a loner, a fellow artist and a best friend, she's starting to wonder if ash is ever going to see all of her.... a + e 4EVER is a graphic novel set in that ambiguous crossroads where love and friendship, boy and girl, straight and gay meet. It goes where few books have ventured, into genderqueer life, where affections aren't black and white.

Overall
A touching story of high school romance that involves character growth, thoughts on sexuality and gender, and bullying. Aside from an overall enjoyment, the story had some gaping holes that left me blinking in surprise, wondering where the rest was.

Strengths
The art style won't be to everyone's liking, but the rawness felt appropriate for the characters who are edgy and fringe. The construction of the pages was sometimes hard to follow, but never confusing enough to disrupt the story or confuse the reader about what was happening. The writing and dialogue both fit well with the artistic style, unifying the elements of the book.

Some thing about the stye reminded me of Jhonen Vasquez, despite the very different topic matter.

There are strengths and weaknesses of the content of this story. Looking at it from Eu's perspective, the story feels pretty self contained and satisfying and, although I didn't really want their relationship to happen, the story and its ending pleased me. Ash's growth from the boy who won't talk into Eu's equal is interesting and dynamic. The story as a whole touches upon issues of sexuality and gender without dragging it into the main focus.

Weaknesses
Ash, who is my favorite character in the book, is too much of an enigma. The narration is mainly from Eu's perspective, but not solely, which created a sense that too much information about Ash was brought up and pushed aside. Very important information is mentioned (repeatedly) but never resolved, including potential incest, potential eating disorders, and the almost blasé way rape/pseudo-rape is handled. Ash has huge issues with being touched but after one encounter it seems to fade to the point where he can get a girlfriend.

I think my biggest issue with these gaping holes is that those elements are what made Ash so interesting and I wanted to know more about them, how they came about, and how they get resolved. Instead the story focuses more on Eu, who is okay, but not nearly as interesting. Some readers may not have a problem with the focus being on her, but most readers will probably be confused--and feel a bit cheated--by the shocking content that is brought up and never really dealt with.
Posted by Unknown at 19:14