Worth (Gray Zone, #2) by Adrienne Wilder 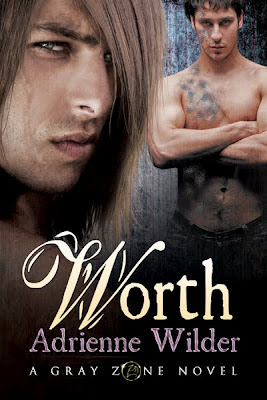 Length: 196 pages
Blurb
Give us your poor, your unwanted, your criminals... that’s the unofficial motto of Atlanta’s Gray Zone, the no man’s land between the city and the Dens of the Kin—the dragons. Between Liam, the two brothers he’s cared for most of his life, and their abusive stepfather, they account for all three categories.

Liam was fifteen when he made the arrangement: as long as he let his stepfather sell his body, his brothers would be safe. Scarred inside and out from years of horrific abuse, Liam is stunned when Jericho, a Lesser-Bred—a dragon’s mixed-blood offspring—makes a pass at him, and he is helpless to resist.

Then Liam’s stepfather welshes on their deal and sells Liam’s brother into the trade, and once again Liam resolves to do anything to save him, even get involved in a million-dollar kidnapping scheme that could get him killed. But that’s not his plan. Now that he has Jericho, Liam knows his life is worth fighting for.

Overall
Although I really enjoyed this story, and love broken characters (plus abused rent boy!), this story didn't quite earn a 5-star rating. I'm not sure exactly what is keeping it from reaching that point, as I can't really think of anything really negative about it. It has good writing, a good story, interesting plot and characters and a fun world, but I still don't feel like it's a 5-star book. Maybe I'm in a blase mood, maybe the characters weren't new/creative enough. Still, a good book, definitely worth picking up.

Strengths
Liam is horribly, horribly abused by his step-father and his johns, is struggling to protect his brothers, and works his butt off so that the boys have all that they need. He's not a weak character, just exhausted and trying to continue to fight to survive while being a little broken emotionally. This pushed all kinds of lovely buttons for me and it was well handled; nothing was described too gruesomely but it didn't ignore the horrors that he's endured. Liam is a lovely character and his struggle is beautiful.

While the plot was more predictable than the first, I still enjoyed watching it unfold. Like a play you've seen before, knowing what happens doesn't make the characters' performances any less interesting. And with Liam in the center, there are plenty of interesting actors on this stage.

I liked how certain elements of the Kin world were handled in this story better than how they were handled in the first. Whether the author assumed people would be reading this book second and would recall from the first novel, or just didn't want to focus as heavily on those aspects, the more pared down descriptions worked well.

Weaknesses
This still suffers from having a glossary in the front. In addition, there seemed to be even more words defined, while not that many additional concepts were used. While it's easy to skip over this, it's hard for the reader to know if anything important is going to be missed by doing that. In this case, I didn't feel like reading the glossary was too advantageous, as the narrator knows very little about Kin society and anything the reader would need to know is explained in the story.

Plot was somewhat predictable, although this didn't damage it's enjoyment much.

Requested this book for review.
Posted by Unknown at 19:54