Crescendo (Song of the Fallen, #2) by Rachel Haimowitz 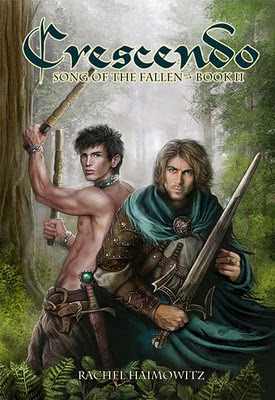 Crescendo (Song of the Fallen, #2) by Rachel Haimowitz
Stars: 4/5

Length: 107,000 words (245 pages)
Blurb
History made them enemies. Chance made them master and slave. Love overcame it all. But love isn’t always enough...

Bridging the hatred of centuries did not come easy for Freyrík Farr and Ayden Vaska. As prince of a war-torn human province, Freyrík could ill afford to fall for an enemy. And Ayden, an elven warrior with three-hundred years of bitterness in his heart, wanted no part of love—not elven, and especially not human. Yet they came together despite themselves and despite the will of their peoples, joining heart and mind to fight a race of Dark Beasts threatening the extinction of mankind.

But the Dark Beast threat pales beside the dangers of the human High Court, home of the Aegis Exalted and the harshest test yet of Ayden’s and Freyrík’s fledgling love.

While Ayden is stripped of his magic, Freyrík is forced to choose between his love for elf, Aegis, and brother, all the while seeking the one uncertain path that might save his doomed race. Time is fast running out for mankind, and only by making peace amongst themselves and with their ancient elven enemies can they end the Dark war—and undo the tragedy that’s plagued humans, elves, and Dark Beasts alike for the last three-hundred years.

Overall
Crescendo picks up where Counterpoint leaves off: Ayden and Freyrik are forced to travel to the main city to meet the king of kings and present Ayden to him (and have his magic bound). Neither is very happy about it, but they are at an impasse: Ayden won't go unless Freyrik joins him, and Freyrik refuses to betray his kings. These decisions will cost them more than they can expect.

The first half of this novel is filled with political intrigue and tough decisions. It's difficult for them to trust anyone, except each other, but even that bond is brittle in their new environment. To balance out the politics, the second half of the book has adventure with sword fights and magic (and walking, because adventures always involve a lot of walking).

Although the ending left me a off balance, I highly enjoyed this fantasy romance.

Strengths
I think I wanted to punch everyone in this story at least once, except Lord Lini and Vitr. OK, maybe not everyone, but much of the leading cast. Why is this a good thing? These characters got under my skin; they acted/reacted like people (and elves) do, and they struggled with their decisions--and the results. Sometimes it was painful and raw, but it was a little bit awesome in that as well.

The Aegis. I love him. I love him because every other chapter I wouldn't know if I could trust him, or if he was secretly cackling behind my back. I loved that I couldn't see him cackling behind the main characters' backs. He drove me nuts. It was great.

Once again the balance of action and politics saved this story from relying too heavily on either. For those who love politics, it will sate that, and for those who love action, there is a fair amount (although perhaps not as much as the first book, or at least differently structured).

There is still a fair amount of romance, although because Freyrik has successfully wooed Ayden, it's not as central to the plot or action. Most the romance here is focused on their relationship continuing despite the odds and the power balance between them.

Weaknesses
Considering the slow build of everything in this novel and the one before it, the ending feels especially abrupt. While I can see the reason for it (too many details would drag it out), I still felt shocked by the sudden arrival of the final chapter. It almost felt like Haimowitz wanted to end with the second to last chapter, but was advised on not, so tagged on another chapter. Mind you, I'm glad it doesn't end with the second to last chapter...but that will be for you to decide.

Received this book for review.
Posted by Unknown at 20:27