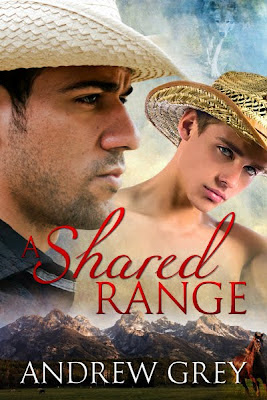 Length: 208 pages
Blurb
After a year in medical school, Dakota Holden returned home to take care of the family business full time and help his father cope with multiple sclerosis. Devoted to his family, Dakota allows himself just one week of vacation a year, which he spends in some exotic location having all the fun he can stand. On his last vacation, a cruise, Dakota struck up a friendship with Phillip Reardon, and it fills an important role in Dakota’s life.

So when Phillip decides to take Dakota up on his invitation to visit the ranch, Dakota is happy to see him and meet his veterinarian friend, Wally Schumacher. Despite Wally’s inclination to help the wolves Dakota’s men shoot to protect the cattle, he and Dakota find they have a lot in common, including a fierce attraction. But they’ll have to decide if the Wyoming range is big enough for Dakota’s cattle, Wally’s wolves, and their love.

Overall
A classically Andrew Grey novel, A Shared Range brings a new taste to some standard fare. Fans of Grey will find a work consistent with his other novels, especially the Love Means... series. New comers will get a taste of his writing and style.

I found the story to be good, but not amazing, and while I may potentially read it again, it's not a tale I'll return to repeatedly. It had several positive points, and throughout there were definite moments that had me smiling and chuckling, but it didn't grab me or move me. However, readers who want sweet and soft will find exactly what they're looking for in this cowboy tale.

Strengths
The interaction between Dakota and Wally was interesting and fresh. We have two men who come from very different lives and have very strong opinions on a sensitive matter. While they come to terms with their differences relatively quickly, it is the central theme of the novel that such a conflict doesn't have to mean that two beings cannot live harmoniously. The struggle of the men as individuals and as a couple is the central conflict and ties together the theme of the novel nicely.

Dakota's dad is used well throughout the novel and I applaud Grey's consistency in never forgetting to check on him before the men go out, and do things such as leaving the door cracked so they can hear if he wakes up. (Though I hope his father didn't hear them when they got noisy!) The father, as a tool to dispense wisdom and as a character, was well handled and added a level to the story.

In addition, I liked the balance of characters in the novel, and how the two main characters, while still the focus, were not the sole elements forming the equation. Too much attention solely on the two relatively average men would have become boring, but the introduction and use of the side characters added an additional dynamic to the story and interactions.

Weaknesses
Not necessarily a weakness, the novel suffers from the condition that all Gays Out West stories bear the burden of: Who is accepting? Obviously if the story has too many un-accepting characters then the main characters will be miserable, but it's still a traditional and mainly conservative area, so not everyone can like it. Grey, from my experience reading his other works, tends to make characters accept more often than not, and A Shared Range is the same. However, the acceptance in this story felt mostly organic, and the trouble caused by the others was just enough to draw awareness to the traditional mindset of the area but not enough to make it the center focus. I put this in the 'weakness' section only because it wasn't really a strength of the novel.

Despite the originality of the characters and their conflict, the rhythm of the story as the characters fall into bed, was traditional Grey in style. This isn't necessarily a bad thing, and for some the familiar style and pattern will be comforting and the exact element they return to this author for. It makes for an enjoyable story, but for me it's not different enough from some of his Love Means... books to really impress me.
Posted by Unknown at 07:04