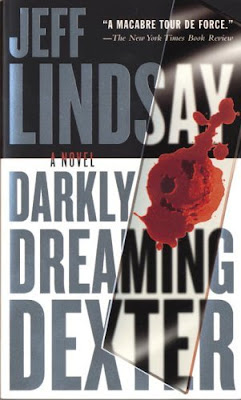 Overall
While this novel has an interesting premise and a selection of interesting characters, the eventual plot-line (and consequential ending) left me tepid. The writing, which felt beautiful and strong in the beginning, began to wear on my patience as the novel progressed. I enjoyed Dexter's "emotional" dilemma at the end, but the rest of the ending left me going..."oh. Meh." Most of it I saw coming and the rest left me feeling like it was TOO prepared to be a series.

Strengths
A creative idea. The idea of writing a book from the perspective of a "good guy" serial killer is interesting and is what drew me in.

Writing. My initial feeling is that the writing is good, but sometimes it does become a little "full of itself." It's very descriptive and sometimes stream of Dexter's consciousness, which gives the reader a good idea about what kind of person Dexter is and how attentive he is--and what kinds of things he's attentive to.

Weaknesses
The resolution, if we can call it that, didn't work for me. The author requires us to take too many leaps of faith that seem untrue to his characters. Also, because this is a series, it leaves multiple of threads unfinished, which is understandable. However, the main thread of the book is also left unfinished, which seems cheap to me.

Be sure to check out my other reviews on my blog.
Posted by Unknown at 07:37