Instead of a star rating, which feels rather arbitrary depending on my mood anyway, I'm going to rate movies differently. These ratings are obviously dependent on preference, so take my suggestions based on a grain of salt in correlation with my review:
Meh: Don't bother watching; Rent: Good, but only worth the rental fee; Buy: Worth watching again, highly enjoyable The Best of Boys in Love (series of shorts) - (Rent) Like most anthologies, this had the Good (Murder in Venice, CA), the Bad (Dirty Baby) and the Ugly (something to do with aliens on a lakeside). It starts with a black and white film: A young man is lingering outside a leather bar, watching a biker head in. The biker sees him, but goes in, knowing he'll follow. The film is mostly silent as the young man tries to take in what's happening inside the bar...and then they break into song. It was WEIRD, but it was meant to be. It was screwed up and I kind of loved it for that reason. But my absolute favorite was "Murder in Venice, CA", where a man is struggling not to be what he is and he has to deal with the ramifications of his actions. Overall the bad shorts outnumbered the good, but only two really made me raise a brow. 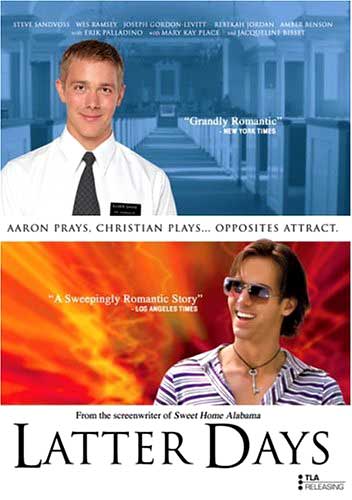 Latter Days - (rent first) I've seen this movie three times, read the book, own the book, and still am not sure how I feel about the movie. I enjoy it (obviously), but it doesn't grab me and make me want to watch it again and again, although I enjoy it each time I watch. The basic story is a flamboyant gay man meets a trying-not-to-be-gay Mormon. There is flirting, a bet, a kiss, an airport, a night in a hotel, and a small series of steps where characters have to reconcile who they are and who they want to be. While a movie about being gay, it's more about community and how everything in life works together to form the bigger picture.

Make the Yuletide Gay - (buy) Definitely rent this before you go out and buy it, because it's 98% campy craziness and 2% coming out story. The basis is an out college student goes home for the holidays, where he is most assuredly not out. When his boyfriend surprises him by stopping by, there is a huge amount of conflict as our leading male tries to make everyone happy. While not for everyone, I found it charming, funny and sweet. The acting was mediocre in some parts, but that could have been related to the amount of cheese the director was going for. If you go in wanting a serious movie, this will fail completely, but if you go in accepting what's given, it will be a funny adventure.

Death at a Funeral (remake) - (meh) I was a fan of the original, but willing to give the American remake a chance, because while I enjoyed the British one, I wasn't madly in love. So I started watching this while multitasking. I think I made it about half way when I gave up. It was pretty much the same as the original, minus the British humor, lovely accents, and did I mention the humor? Instead it replaced it with an American humor that was mediocre at best and left me wanting. People unfamiliar with the original may have a different take, but I wasn't terribly amused. Philadelphia - (Rent) I know this is a classic in gay film, but while I could respect it's importance, it didn't really do anything for me. The story of a gay lawyer who is fired for having AIDS, this movie touches on important topics such as equality, the disability act, biases, family and, ultimately, death. The progression of the court case is secondary to the progression of the friendship between the two main characters played by Tom Hanks and Denzel Washington. Enjoyable, overall. The Broken Hearts Club - (buy) If everyone in the show Friends had been gay, then it would have been this movie. Well, sort of. There is a similar feel with friends living together, couples moving among groups of friends, while always wondering why their group is friends at all. Overall the movie looks at what it means to be gay, to be out, and to be in a relationship, while also looking at taking responsibility and doing something with your life. A good, varied cast play up the funnier parts of life, while also addressing the more serious aspects. I was surprised to enjoy this one so much.

In & Out - (Rent/Buy) While I enjoyed this movie, it wasn't good enough that I'd run out and buy it. It was quaint and more mainstream, which I appreciate, but didn't do anything fresh that grabbed me. An amusing comedy about an English teacher who is engaged to be married within the week when one of his previous students outs him as gay at an awards ceremony. As he struggles to deal with reporters, his neighbors and his sexuality, we watched with humor and a little bit of tenderness at the reactions of his family and his community, and perhaps finally, most importantly, his students.

A Love to Hide - (Rent) While the central focus of this story is on homosexuals and Jews in occupied France during WWII, there is more to it than that. Aside from the almost over-the-top behavior of some of the Nazis and the fact that I never really connected with any of the characters except Phillippe, this was an interesting movie. This film touches on topics of family, love and being who you are. Although sometimes heavy handed, some of the characters, like Jacques, are villains who you can relate to, even if you can't approve of his actions (and I hope that you can't!). It's sometimes slow moving and the very end seemed unnecessary to me, but I can see why it was added.
Posted by Unknown at 08:57