Kindred: The Embraced - In the dark and sinister world of the Kindred, five underground vampire clans clash with mortals and each other in their battle to rule modern-day San Francisco, until cop Frank Kohanek (C. Thomas Howell) discovers the truth and threatens to expose their secret. Vampire leader Julian Luna (Mark Frankel) must fight to hold onto the vampires' way of life -- as well as his title of "Prince of the City" in this short-lived Fox television series.

(rent) This isn’t the first time I’ve watched this show, but upon rewatching, I’m seeing it in a whole ‘nother light. pre-teen me was in love with Julian. Modern me things the clans are full of idiots (though now I’m rather taken with Julian’s sire). It’s not bad, but it will take a certain love of nineties’ television to really appreciate this show. 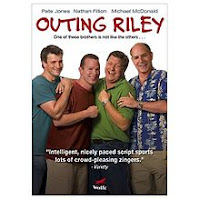 Outing Riley - Bobby Riley (writer-director Pete Jones) is finally ready to come out to his conservative Catholic family and stop pretending that his best lesbian pal is his girlfriend. But it turns out he's not the only one harboring a secret. When Bobby announces to his three disbelieving brothers that he's actually in love with a man, that revelation turns out to be just a sample of the smorgasbord of surprises members of the clan have long been hiding.

(rent)This is a sweet movie that looks at one man’s challenge to tell his Irish Catholic family that he’s gay and the resulting reactions of each family member (mainly the three brothers). The movie didn’t really speak to me because of the format and humor, but there were some nice things about it as well, such as the reality of how the family reacted. While at times things felt awkward and weird, there were also sweet moments, etc. So worth taste-testing, but I wouldn’t buy it sight unseen. Also, the description that comes with the movie isn’t lying...but it’s a little misleading as well.

Captain America: The Winter Soldier - Extending the saga of Marvel's The Avengers, this superhero sequel finds Steve Rogers living quietly in Washington but growing increasingly restless. So when a deadly new foe surfaces, he transforms into Captain America and allies with Black Widow.

(buy) I thoroughly enjoyed this film, although its representation on Tumblr is...a bit off mark. However, this has some great character development, awesome action sequences, and a fun, twisty plot. I think the oversaturation on the internet could really drive some people away from it though. And the fact that it's part of a much larger world (although familiarity with those worlds is not necessary.

Sex Positive - Director Daryl Wein's penetrating documentary explores the life and works of Richard Berkowitz, the provocative S&M hustler turned AIDS activist credited with spearheading the safe sex movement in the 1980s. As the AIDS epidemic burgeoned, Berkowitz collaborated on a (then-unpopular) study with Dr. Joseph Sonnabend and activist Michael Callen that cited unsafe sexual practices, promiscuity and drug use as key factors in the spread of the virus.

(rent) This is interesting from an educational standpoint (especially if you know very little about what it discusses). It was handled well, in what felt to be a well-balanced way, and I definitely learned more about the early AIDS epidemic and the politics surrounding it than I had even known was a thing before. I definitely think it’s worth checking out for anyone, although I do still feel much of it, like most documentaries, must be taken with a grain of salt.

Hetalia: The Beautiful World (season 5) - They said it couldn't happen, but they were as wrong as a stack of pancakes in a cage full of bears! The adorable boys of Hetalia are back with some new friends and a super sparkly new look.

(rent) If you haven’t seen the previous four seasons, you’re most likely going to be very confused if you start here. Hell, you might be very confused anyway. This continues in true Hetalia style, which mostly means it’s cute, chuckle-worthy, but not really substantial. There are factoids and information I picked up about history, but for the most part this is cotton candy. But for some reason I keep buying the seasons.