Kamisama Kiss - Nanami was just a normal high school girl down on her luck until a stranger’s lips marked her as the new Land God and turned her world upside down. Now, she’s figuring out the duties of a deity with the help of Tomoe, a reformed fox demon who reluctantly becomes her familiar in a contract sealed with a kiss.

(meh) This show didn’t particularly do it for me. It had nice art and men drawn in a style I appreciate, but the plot and dialogue were lacking/not of interest. Some of the side characters were fun and charming, and I would have loved to have seen more of them, but I found Nanami to be dense and uninteresting. A few of the story arches were good/had potential, but Nanami’s presence (and repeated stupidity/lovestruckness/high-schoolness) ruined it for me. I probably wouldn’t have finished the show, except for obligation and snarking at it with my friends.

LEGO Batman: The Movie - When Bruce Wayne receives the Man of the Year award, jealous fellow billionaire Lex Luthor decides to top Wayne's achievement by running for president, recruiting the Joker to create an atmosphere ripe for fear-based politics.

(rent) I wasn’t too enthused to watch this movie, so I was multitasking/not paying attention. Overall, I think it was an enjoyable/amusing flick, but it did nothing in particular to entice me to plop down and watch. I think the best part was when the rest of the superheroes arrived, but it wasn’t a bad movie, it just didn’t interest me.

Fish Out of Water - Spurred by director Ky Dickens's own coming-out story, this playfully animated documentary confronts the slippery topic of homosexuality head on, honing in on Bible verses oft-cited as condemnatory and opening them to fresh interpretation.

(rent) This is definitely worth a watch, especially for queer or questioning Christians who need some help or support in reconciling their faith and sexuality. As someone who has read several books related to these concepts, there wasn’t a whole lot that was NEW for me, but it reinforced what I’d previously learned, phrased some things in a different light, and I think this is something that anyone with interest in Christianity and/or LGBTQ culture would enjoy watching.

Trigun: Badlands Rumble - In town surrounded by quicksand, an outlaw from Vash the Stampede’s past has resurfaced after twenty years. His name is Gasback – and he’s looking to cause a little trouble.

(rent/buy) It’s been more years than I’d like to recall since I washed the original Trigun series, but this felt like sinking right back into one of the bad-guy-of-the-week episodes. I was a little confused about where things fell in the timeline (because it’d been so long since I’d watched), but it was still very enjoyable, bringing back all those fond memories of why I need to rewatch Trigun.

For those unfamiliar with the series, this may be a good way to dip your toe in, but generally it might be best just to try the original stuff, as this takes place somewhere in the middle of the original series, so confusion may abound. 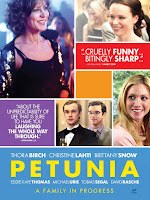 Petunia - Charlie Petunia hails from a family of neurotic New Yorkers and has sworn off sex. When he meets George, Charlie thinks he's finally found a guy worth breaking that pledge -- but their relationship hits a snag when Charlie learns George has a wife.

(rent) I’m not quite sure how to feel about this movie. It’s very odd and different, which is refreshing, and it’s quite the whirlwind. Most of the characters aren’t particularly likeable, but they aren’t ones you despise either. They’re all just real, very flawed, people. I have very mixed feelings about everything in this movie, except maybe the ending. While not completely realistic, maybe, it was very sweet and happy and still had threads of discord that felt in keeping with the realistic tone.
Posted by Unknown at 18:07