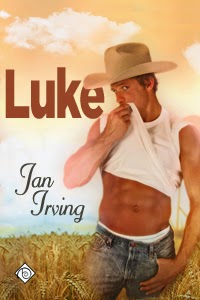 Wandering cowboy Luke Walker is at the end of his rope after his girlfriend abandons their newborn daughter. A terrified new father, he's grateful to meet Dr. Morgan Gallagher. Morgan recognizes that he and Luke could help each other: Luke can rebuild Morgan's property and land so Morgan can have the horses he wants, and Morgan can provide the younger man with a safe place to raise his daughter. In theory, it should work out perfectly, except that Morgan is instantly attracted to Luke-a straight man-and sharing the same cabin and caring for the baby is a more intimate arrangement than he'd imagined.

A sweet story without much substance or conflict.

I think the biggest weakness in this book is the lack of conflict. While there is some internal struggle and growth, generally everything falls into place neatly. Too neatly. The baby's momma shows up, but doesn't cause any trouble, the exboyfriend-ish has no hard feelings, and there's no negative ramifications for the gay cowboys.

The biggest conflict was the baby's fever and the guys getting over themselves, and even that didn't seem like such a big problem since the supposedly straight dude hopped right over that hurdle.

There was nothing I hated about this book, but there's very little I remember about it either. Parts of it were cute, and it would work as a series of vignettes, but as a novel it didn’t hold up.

I may have enjoyed this story more if I’d read the first of the Sylvan series, but since the characters in that didn’t play too major of a role, I didn’t feel lost.
Posted by Unknown at 11:20