Weight of a Gun II, an anthology by Storm Moon Press 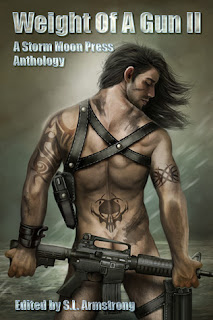 Weight of a Gun II, an anthology by Storm Moon Press
Stars: 3.5/5

Length: 36,000
Blurb
Everyone knows that guns are dangerous; they have long been a subject surrounded by controversy. Combine them with sex and you have a subject that is virtually taboo, but smoking hot. Our second gun kink anthology continues to push the envelope of combining sex and guns with three more stories hot enough to cause powder burns.

Continuing in the world of The Machinist, Avery Belfour and his captor/lover Lord Harrow now face the threat of The Inquisitor. But Harrow is very possessive of his prize and has no intention of turning Avery over without a fight.

Then, a routine black market bust goes wrong for Officer Caleb Baker. He ends up Playing With the Big Boys when the thieves get the drop on him and decide to have some fun with their new catch.

And finally, Cole Beauchamp is the greatest pistoleer of all time; he's also thoroughly unpleasant and has a habit of scaring away his assistants. But when he is sought out by a devotee with a love of guns that matches his own, Cole finds a new respect for Benjamin Pepperwhistle and the Fantabulous Circus of Wonders.

Overall
This has some good stories, and for those more into gun kink, this will definitely be something to pick up. They are all well written and enjoyable, although some of the stories were lacking, which turned what could have been a fantastic anthology into an average one.

Though the cover makes up for that a little. Another gorgeous one.

The Inquisitor by Gryvon
Stars: 2.5/5
Note: I read "The Mechinist" in the previous anthology, but didn't remember any of it when reading this story. Even taking into consideration the previous story, I think most of my qualms still stand.

I feel like I'm missing something from this story. There is so much world building, and while it happens through character action, there is also a lot of unknowns that are never explained. The end resolution also feels incomplete, as if the lessons learned by Avery only had a minor purpose, when it feels like a grander scheme is in play. More points are raised and never really mentioned, and the title (and instigating element) seems secondary to much of the story.

I enjoyed the writing and everything that I saw here, but it felt like an incomplete story. There were too many elements left hanging and while a happy ending isn't completely necessary, this felt more like the opening chapter than a standalone. I want more--not just because I enjoyed it so much, but because it felt unfinished. I would have loved to have given this a higher star rank, but the ending was not enough of an ending to satisfy. Considering this is the second story of this type, it seems to be ongoing, but offers no indication when it'd be continued.

Benjamin Pepperwhistle and the Fantabulous Circus of Wonders by Cornelia Grey
Stars: 5/5
Yum. This is a sexy, smoking hot piece that weaves in touches of humor and humanity that brings it all together. I loved the two main characters (one hard ass, one newbie) and the colorful people who surround them in rainbows of movement. While the plot is pretty much exactly what you expect, it delivers in every way you want it to. And maybe even a little more.

I think my only complaint (and it's minor) would be that we learn nothing about Pepperwhistle's life before he came to the circus. But that's mostly just reader curiosity, I think the hints and teases we're given are all that's needed for the story. After all, he's leaving all of that behind him and moving forward--there's no point dwelling on the past.

Another fantastic piece by Grey!
Posted by Unknown at 10:31