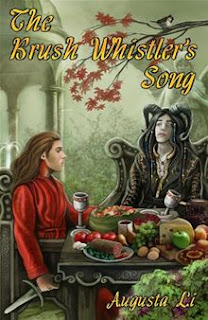 Length: 22,000 words (55 pages)
Blurb
Young Arjin is caught in the web of an ancient truce. Barely into his adulthood, he is given as tribute to the mysterious Najadira, part of a race of nigh-immortal horned warriors known as the Ansari. But Arjin is no innocent. Since his childhood, he has been trained for this day, groomed by the temple priests for a singular purpose: not to please the Ansari, but to murder him and free his people from the terms of their agreement.

Najadira, though, is old and jaded, and unsurprised by Arjin's true nature. Still, he chooses to keep Arjin near to him, finding that the young man's zeal quickens his old blood like few before him ever did. He allows Arjin access into his world, a world of beauty and wonder that had before now been denied. And as Arjin learns more about Najadira, he begins to question his teachings about the Ansari. Ultimately, he must choose between taking a life in the service of his beliefs or abandoning his duty and thereby condemning his soul to the decadence and sin surrounding him.

Overall
Wow. That's about all I can say. In a relatively short span Li creates a world, fills it with color, and brings the two main characters to life. My only complaint is that I want more!

Review
I think what immediately caught my eye with this story is the gorgeous descriptions Li uses in detailing Arjin's new home. Everything is bright and colorful and very nearly jumps off the page. After reading an excerpt, I very much wanted to delve into the decadent writing. And it's absolutely worth it. Not only is the writing a wonderful practice of the art, but the story and characters hold up in comparison.

Arjin is a man on a mission and despite Najadira knowing what that mission is, the two bond. Najadira is fighting against Arjin's entire past, while Arjin struggles between what he knows and what he feels. In some ways this reminds me of Every Good Thing by M. Jules Aedin, although much shorter. Arjin's inner conflict is what propels the story and gives plot to these two living together, and the reader will delight in seeing Arjin be swayed by Najadira and then repulsed.

This tale explores self-discovery and coming of age, in addition to several religious and cultural concepts, and in doing so can push some sensitive subjects, although I felt everything was handled respectfully. There were some convenient plot elements in this regard, but they weren't off-putting.

If I could say one negative (aside from wanting to see more of these two, although their story is quite complete), it's that I felt a giant question was left hanging in the air in regards to Najadira's immortality and Arjin's mortality. The fact that this was never addressed soured (a little) the wonderful conclusion this story draws.

In general I found this to be a delightful story that is quickly devoured and leaves a lingering splash of color across the palate.
Posted by Unknown at 20:35