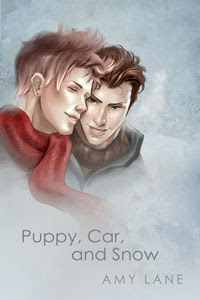 Length: 92 pages
Blurb
Ryan’s entire life changed the night Scott surprised him in a bathroom at a party. Now Ryan’s soulless climb up the corporate ladder has stalled—but his quality life has become a whirlwind of laughter, joy and surprises, thanks to Scotty’s playful, gentle heart.

After three years together, they’re going to Ryan’s parents’ cabin to spend Christmas. Snowed in by the weather and locked under the icy glare of his mother’s disapproval, can Ryan show he has found the most profound happiness in the simplest of things?

Overall
I can always trust on Lane for a sweet story, especially if it's around the holidays. I needed some cheering, so I picked this one up and found it to be a good mix of sweet, realistic, and funny. A great Christmas story.

Review
I'm not familiar with Ryan and Scott's previous stories, but I think the background Lane provided gave enough facts that I wasn't lost while not rehashing it for those who are familiar with these two men. They have a Love-at-First-Sight background, but they've also spent three years building a real life together, which I find just as wonderful as the first coming together.

I think what really brings this story to life is the characters. They are, well, a bunch of characters! (Sorry, couldn't help it.) Although our narrators (Scott and Ryan trade off back and forth) have already formed opinions about the cast, what's really great is that those opinions are able to be pushed and stretched.

The bigoted character isn't just a bigot. He has some other qualities too. The stuck-up sister? Also a caring mother. In a short space, Lane takes this tiny cast and shows the depth of people, even people you don't like who you're stuck with because they're family. It left me with a very positive, Christmas-y feel.

The plot was good, cute, but I think outshone by the interplay of characters, so I don't really have much to say on it. A good, joyous tale!
Posted by Unknown at 17:45