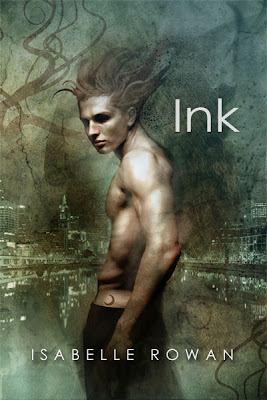 Length: 230 pages
Blurb
Roman centurion Dominic drew his last human breath during the time of Hadrian. In the centuries since, he’s seen much of the world change around him, but the vampire finds himself held captive in Melbourne, Australia, by his fascination with young, passionate, fun-loving, and alive tattoo artist Michael Chapman. Unable to resist the lure of Michael’s beauty, Dominic finds himself entering the parlor to get a tattoo he knows will fade.

The attraction he feels only grows, and despite Dominic’s extreme reluctance to get involved with a human, he and Michael form a bond—a connection that all too soon attracts the attention of a dark specter from Dominic’s bloody past. Soon, a dangerous game of cat and mouse threatens not only the budding romance, but also their humanity.

Overall
A classic tale of a young man's attraction to a vampire ending with a question of humanity and whether vampires are still of the same stock from which they were born. Ink is a slowly building story that uses a third person omniscient perspective that mainly sticks to the two main characters. The story was fairly good, the writing the same, but I had difficulty really getting into it. This teeters on an Insta-Love edge, but the way it was handled keeps it from being too terrible an example. A pleasant overall read, those who devour vampire novels may enjoy it especially.

Strengths
While there are elements that I really couldn't grab and character moments that made me raise a brow, I really loved some parts of the characters. Abby especially was a delight, the only one in this whole story with her head screwed on right! Dominic has his moments, but Abby pegged him rightly as a Louis character, and Michael, while mostly sensible and a good guy, sometimes seems to be playing the role the author set out for him. Galen (see "dark specter" above), was a surprise and I enjoyed his depth for being a late-appearing villain.

Along those same lines, the ending surprised me, but didn't necessarily disappoint. The epilogue made me raise a brow, but I also liked the sense of mystery it left in the wake of the resolution. Compared to the slow beginning, the ending seemed almost rushed, although there wasn't much to be done to extend it, either. Still, I was satisfied, if not a little sad, to see the way the story went. Also, I loved the role tattoos and markings played in the story.

I really love the cover. It's arty and dark with a strong fantastical feel that really caught my eye. Elements of it relate to the content of the novel without strictly sticking to it.

Weaknesses
While not too terribly cliche, nothing felt especially fresh about this vampire tale. Old vampire thinks of vampires as godly and that the blood lust is unavoidable; young vampire struggles to retain his humanity. There are definitely some interesting elements of the story and while not necessarily new ideas, Rowan approaches the idea with confidence and from a slightly unique angle.

Even understanding the need for it, the beginning of the story is very slow to open as it develops the characters and the situation. Some may find this too slow and lose interest before the action starts. I didn't mind, but it took a little to keep me going, and this definitely wasn't a page-turner until near the end.

Requested this book for review.
Posted by Unknown at 20:35