All Bets Are Off by Marguerite Labbe 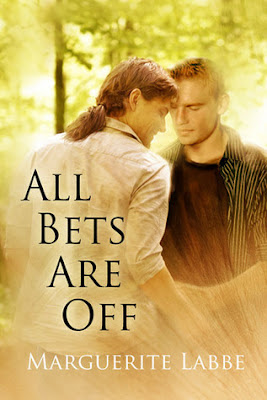 All Bets Are Off by Marguerite Labbe
Stars: 4/5

Length: 280 pages
Blurb
It only takes one night with Ash Gallagher to make Eli Hollister think he’s finally met the right man at the right time. Good thing he doesn’t bet on it, because Ash turns out to be a student in Eli’s class at the local college. Eli can’t deny he’s attracted, but now it’s complicated. He’s already in enough trouble with the department head, a man who would like to see Eli denied his tenure and fired.

Ash is looking forward to taking his life in a new direction. After serving one active-duty stint in the Marine Corps and another in the Reserves, he’s ready to put his military life behind him. The last new experience he’d planned for this semester was to fall in lust with his English professor, but the more Eli resists, the more Ash is determined to have him. Then he discovers Eli’s playing for keeps, and Ash is only interested in a fling... or is he? Between these two, when it comes to life and love, all bets are off.

Overall
I went into this novel with no real expectations. The cover was attractive, but not enough to catch my eye, the blurb was OK, but I still hesitated. However, hearing a few positive scores, I decided to give this a chance (ah, the power of ratings!). I'm so very glad I did.

Like a new twist on old comfort food, this novel drew me along through the pages, never really dragging me, but keeping me there nonetheless. I wasn't clawing at the book to see what happened next, but my curiosity was definitely peaked and when I was reading, it was warm and comfortable.

This story has army boys, professors, a playfully light touch of kink, some mystery, and various plots that were sculpted from the story with ease. While this book may not have done anything to amaze me and earn a fifth star, it's definitely something I'd want to read again on a lazy day.

Strengths
Eli and Ash are a nice pair, touching on sweet, hot, and tender, but often mastering in silly, playful and mischievous. They definitely feel an attraction, a magnetic pull even, but because they recognize it and accept it, they are able to behave like friends—really good friends who stare at each other's asses. It was a fresh dynamic between them. The rest of the cast is diverse, weaving through the story in perfect rhythm.

One of the best surprises this book offered was its plot. The blurb makes it sound like another romance where the men have a fling and resist their growing emotional attachment. It is that, but it's also so much more. There is some light mystery work, crazy bosses, and struggling to resist temptation. The plot is made of several threads that all eventually tie together (or tie up), leaving the story feeling whole, cohesive, and just plain enjoyable. There's nothing like trusting the author to tell the story and then being given a story just like you were promised.

The strongest part of this novel is the way everything was handled. Characters were consistent and not just forgotten, plots were followed through and resolved, and the pace was steady, never too slow and never rushed. While this novel did nothing to amaze me, it left me very satisfied.

Weaknesses
Nothing really blew me away with the story. It was good, great even, but not awesome. Not really a huge weakness, but the reason it didn't get five stars. Maybe a lame reason, but a reason.

Nit-picky point: At one time Ash is jerking Eli off and somehow gripping Eli's shoulders with hands. So minor but for some reason it really stood out in my mind. Hands on shoulder, hand on cock, hands on shoulders (again), hands on cock (again). Wow, Ash is really special!

Requested this book for review.
Posted by Unknown at 07:26