Daughters of Artemis, an anthology 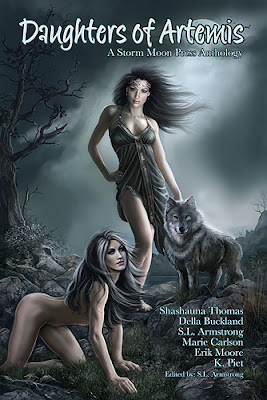 Daughters of Artemis, an anthology
Stars: 3/5

Anthologies are always hard to judge, since the writing varies, both based on strength and personal preferences. This anthology was a mix of mediocre and good, with just about every other story being well written. For fans of the genre, this will be an enjoyable dip into several different worlds with varying takes on werewolves and steamy scenes between our heroines. It's worth a shot if these two things push all your buttons, but the stories aren't strong enough on their own to tempt an outsider.

The Fullness That Love Began by Marie Carlson
A story that focuses more on sex than plot, there are several major issues that arise during the story. However, all the Big Deals aren't dealt with by the end, and although it "leaves you hanging," I didn't feel frustrated. It feels like it's the beginning of something bigger, but I wasn't involved with the characters enough to be worried. A bit too sex heavy for my liking, especially as the first in the anthology, but people may feel differently about it.

The Fire of Her Eyes by K. Piet
Starting and ending with action, this story has a nice lull in the center where everything becomes peaceful and domestic, letting the reader see how the characters react in urgent, political, and romantic settings. The difference and variety quickly develop the characters and the bond between the two leading females. Everything flowed nicely and the story was well constructed.

While she is arguably the more secondary of the two characters, since she's not the narrator, Yun stole the show for me. With her quiet strength, awesome ability, and talents, in addition to her blindness, she is very likable. Plus, the sensuality described between the two characters in bed gives the sex scenes a greater purpose than the tawdry. A nice, compact glimpse into this wolf pack.

Luna's Mate by Shashauna P. Thomas
My first impression of this story was that it was going to be humorous because the writing style seemed to focus on the silly: Luna's bad luck and clumsiness. However, it quickly turned darker as Luna is attacked by wolves and her luck just seems to get worse from there. The plot line had great potential as the awkward misfit finds her place in the world after two harrowing encounters.

However, I was never able to really enjoy this story because the writing kept me from sinking into the characters and really being absorbed in their problems and emotions. The writing wasn't bad, but it wasn't smooth enough to let me forget that I was reading. I felt like I was being told more what was happening than being shown it, although things were written in an active voice. Part of the problem could stem from the feeling that this was a larger story clipped into a short, thus it left the author trying to prune facts to be able to fit into it, making some of the writing come across choppy.

To Pierce the Sky by Erik Moore
I'll be honest, I had a little snicker at the title, because sometimes I have the maturity of a twelve-year-old. However, this is a good story, with nice pacing, and interesting if not unimaginative characters. The conflict and resolution are believable and realistic (which I think we can agree are different things when talking about a world with werewolves). Susan also had a character development point that I thought worked well for her history and her character and helped make her more interesting.

The story takes place in a Lakota tribe (of werewolves, of course), and mixes tradition with modern conveniences, as well as doing an excellent job of weaving white and Lakota culture/myths. And since it did make me laugh at first, there was a good reference of the myth in the title. Overall enjoyable.

Protect the Moon by Della R. Buckland
This short action fantasy felt a little too cliche for my tastes, as the (special) big, tough werewolf is sent to protect the (special) new-age witch. Much of the story seemed to happen without much explanation as though it was just a taste of the world, although it didn't really entice me to want more. It read like it was pulled from a table top RPG, from the specificity of clothing and weapons and the set up of the politics to the amount of detail given to the characters' appearances.

The writing was stiff, probably due to the consistently short sentence structure, although I recognize I'm hypersensitive about this. In addition, Jade presented as an innocent woman who is being sucked into a world that's bigger than she thought. Several of her actions in the beginning of the novel take an almost wicked angle once the reader has knowledge of the facts at the end. I didn't like her, didn't trust, and wasn't sure our lead female should trust her either.

Sacrifices by SL Armstrong
The werewolves in this story weren't really werewolves, although wolves were the theme of the group of elves. The culture and society in which this story takes place seems deeply involved, although the reader is only given a glimpse. Although I'd liked to have learned more, I appreciate that the story wasn't burdened with information and the reader is left to make some leaps and fill in some blanks. However, that being said, some clarification on what exactly the characters in the story were would have been helpful. Things were a little too vague at times.

Still, this was an enjoyable story where the main character has to appease her King, her mate, and her pack while also finding her own happiness. While the plot didn't blow me away, the writing was strong and it was a good finish to the anthology. It's also interesting to note that the first and last stories in the group both involve het sex and child bearing.

Received this book for review.
Posted by Unknown at 16:13

Thank you for reading and reviewing the anthology, Alex! Anthologies are always a little hit-and-miss, so we're happy that you enjoyed a few of the stories.

A few of the stories from the anthology will be available as individual releases this December, so if people liked the sound of a particular story but don't want the anthology as a whole, they can keep an eye out at Storm Moon Press this December for those releases. ^_^

Thanks again!
~K. Piet
(on behalf of Storm Moon Press)

Oh! And, by the way, S.L. Armstrong's short story "Sacrifices" in this anthology is also part of a larger world (The World of Egaea). It's actually the same world that we depicted in "Alpha's Pride" from the Wild Passions anthology. We plan on exploring that world much more extensively in our collaborative fiction. ^_^

Just thought I would shed light on that detail!