Bear, Otter, and the Kid by TJ Klune 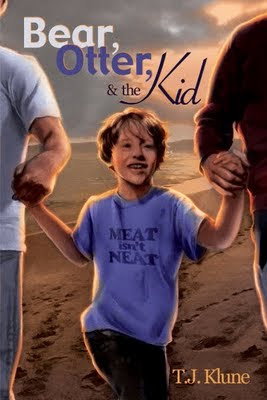 Blurb
Three years ago, Bear McKenna’s mother took off for parts unknown with her new boyfriend, leaving Bear to raise his six-year-old brother Tyson, aka the Kid. Somehow they’ve muddled through, but since he’s totally devoted to the Kid, Bear isn’t actually doing much living—with a few exceptions, he’s retreated from the world, and he’s mostly okay with that. Until Otter comes home.

Otter is Bear’s best friend’s older brother, and as they’ve done for their whole lives, Bear and Otter crash and collide in ways neither expect. This time, though, there’s nowhere to run from the depth of emotion between them. Bear still believes his place is as the Kid’s guardian, but he can’t help thinking there could be something more for him in the world... something or someone.

Overall
Wow. I picked this up to review only because I'd heard good things and the names intrigued me. I don't really like stories involving kids, especially since this one so obviously centered around kids, or at least the Kid. I'm glad I did, because if not I would have never experienced that which is the Kid and Otter and Bear (even if you want to beat some sense into him half the time) and Creed and Anna and Mrs. Paquinn. The cast is actually surprisingly small, considering how long the book is, but it's a constant roller coaster of emotions as these characters interact as only close friends and family can.

Strengths
This story takes the reader on a trip that is several layers of amazing and heavy-duty emotional turmoil. It's not playing at being great literature, but it is doing exactly what the story sets out to do: Rip your heart out, pour salt on it, then shove it back in your chest. And it does this several times, although one time is especially painful. For those who thrive off this pain, the book will be delicious, trust me. Those who don't enjoy this agony will probably find it long. I loved it (see below: Emotional Masochist).

The characters were funny, sweet, caring and incredibly human (even if I wanted to throttle Bear). Even Bear is lovable because while wanting to kill him, you more want to kill his mother who inflicted the emotional damage and left him that way. And while that doesn't excuse everything, for him it does at least a little, because he strives so hard to protect the Kid and himself from getting hurt now, even though it ends up just hurting them both more. And Otter has to be the most patient and biggest besotted fool that ever lived. But I love him. I want to curl up on him and take him home in a big box (with holes) and keep him. (Yes, I'm a sap sometimes.) Also, since I don't like children stories that much, I was glad to find that the Kid is very mature for his age.

While the writing wasn't amazing, it remained honest to the narrator's voice, and since this was first person, much of the "style" is dependent on keeping true to the narrator, which I felt was done here. It was good, strong writing that served its purpose and I look forward to reading more by the author to see if it will continue.

One final note on the plot. There are two main sections to the plot, one is Bear coming to terms with his sexuality and feelings toward Otter, and the second is him learning to trust his loved ones in a way he obviously hasn't for the last three years. This could almost be broken into two books, although it works just as well as one and there would be some down sides to it being two different books, especially because they are on such a short time line. This isn't a plot-heavy story in some ways, as the plot is definitely character driven, although some events are motivated by outside characters.

Weaknesses
This is a long and angst-filled story, which I loved. But if you aren't in the mood for a long journey filled with more tears and poor decisions than you can shake a stick at, then you will want to put this aside for another day. I definitely recommend this book, but it won't be for everyone, especially if you don't like overly emotional, slightly maudlin tales. If you do, or are willing to get one a chance, this is a great, very well-done example.

With that in mind, even for me the story was a touch long. Half-way through I was like "Really, there's more?" and then stuff happened and I was swept up in it. But at times the rational part of my brain did point out the story was kind never ending and Bear is a super idiot. SUPER idiot. But he's also emotionally broken, so I forgave him. (And possibly because I'm an emotional masochist.)

Requested this book for review.
Posted by Unknown at 19:00

I passed over this story because I'm not keen on romance books with kids in them. The kids usually end up being too cutsy or downright irritating. Your review has made me think again about this. I like stories which are strong on character and emotion so this sounds like the sort of book for me.

Thanks for the great review, Alex!