This Boy Drove an Orange Slope

(rent) This is a very weird moving. It’s obviously making a ton of commentary on society, etc, and it’s definitely dark and deep (and sometimes squicky). I’m glad I’ve seen it just because it’s so well-known and part of culture, but I can’t really say I enjoyed it. On the other hand, I’m not sure this is a movie that’s meant to be enjoyed. More studied and analyzed than anything.

Kids on the Slope - (12 episodes) The story of Kids on the Slope really starts rolling when the classical piano-trained Kaoru encounters Sentaro and falls head-over-heels in love with jazz.

(rent/buy) This show was sold to me with the description, “Stupendously, nonstop gay...oh, and jazz.” And considering all the characters in it are supposedly heterosexual, it’s pretty nonstop gay. The bond between the two male leads could be argued as best friends, but it goes beyond that. The relationships are horribly high school sometimes (uh, in a good way), and they suffer from the human condition of being unable to communicate, but this is a great show with fun music, a good plot, and an ending that left me giggling and repeating, “so gay” without being stated as gay.

Star Driver - (26 episodes) Takuto, The "Galactic Pretty Boy," finds himself dragged into opposition with the "Glittering Crux Brigade," a mysterious group that intends to take possession of the island's Cybodies for their own purposes as well as break the seals of the island's four Shrine Maidens, whose powers prevent the Cybodies from functioning outside of Zero Time.

(rent/buy) If I were to read this show’s description anywhere, I probably wouldn’t watch it. Giant robots? High school romance? Ugh. But this show is more than it appears. There are some high-school-hijinks moments, but for the most part the characters (especially the main three) are very mature and responsible. The robot battle scenes are a necessary evil, but generally they don’t last too long. What really sold this show to me was the ending, which felt kind incomplete, but gave a subtle answer to the question of the love triangle. Who is she going to pick? Who says she has to…

This Boy Can Fight Aliens! - (30 min OVA)When aliens suddenly invade the world, Earth seems to be fighting a losing battle until Arikawa accidentally discovers a young man, Kakashi, who has the power to defeat the attackers. Unfortunately, Kakashi has also lost his memory, and with it the knowledge of how to actually use his power. Moving Kakashi in with himself and his commander, Arikawa accidentally starts a strange triangle of emotions and relationships. A triangle that threatens the fate of the planet as Kakashi begins to question his own motivations.

(rent) This is definitely one to watch before buying, as the art styles are very different (either to save money or for artistic reasons...or both), and the story is disjointed and a little confusing. Some things are never really made clear. Some questions are never answered. While there is some resolution, and the development of the relationship is not given much focus, there is also a lot left unsaid and open, which I felt depleted the quality of the story being told. In some ways the artistic style seemed to take center stage, filling time that could have better been used to develop plot. 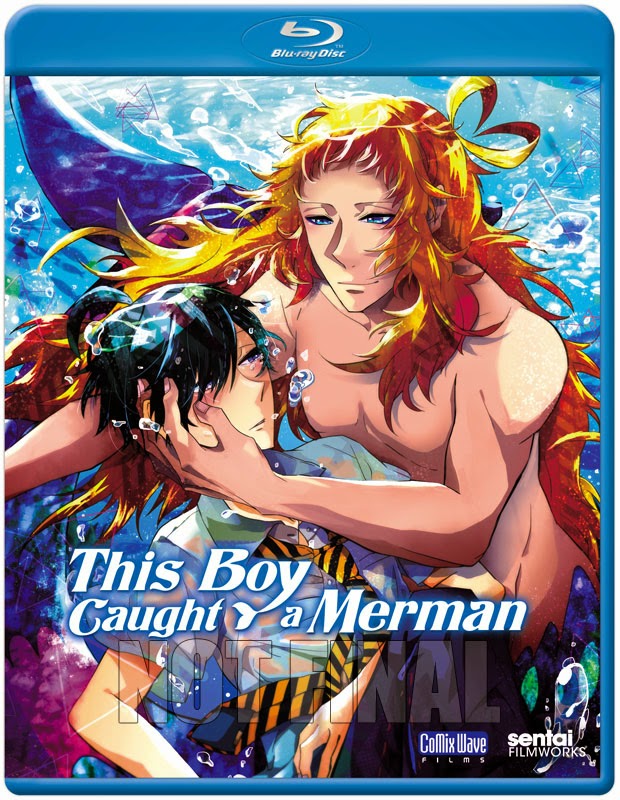 This Boy Caught a Merman - (30 min OVA) Shima has always strove to be an excellent obedient child to his parents and to others, but in the process he could never be himself. Because of this he has always felt lonely, even with all the people who say they love him. When the picture of his recently deceased grandfather falls into the ocean, Shima nearly drowns jumping in after it. He is quickly saved by a mysterious man.

(rent/buy) This short piece won’t be for everyone, but I found it exceptionally cute and sweet. It has some depth, but isn’t too heavy, really, and it looks at some of the problems of a human/nonhuman relationship. For how short it is, it covers a lot of ground and doesn’t feel like it shorts you any.
Posted by Unknown at 21:30