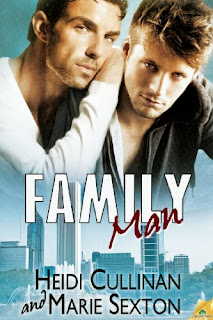 How does a man get to be forty without knowing whether he’s gay? That’s a question Vince Fierro is almost afraid to answer. If he is gay, it’ll be a problem for his big, fat Italian family. Still, after three failed marriages, he can’t help but wonder if he’s been playing for the wrong team.

There’s only one way to settle it, once and for all—head for Chicago’s Boystown bars, far from anyone who knows him. Naturally, he runs smack into someone from the neighborhood.

Between working two jobs, going to school, taking care of his grandmother, and dealing with his mother’s ongoing substance abuse, Trey Giles has little time for fun, let alone dating someone who swears he’s straight. Yet after one night of dancing cheek-to-cheek to the sultry strains of Coltrane, Trey finds himself wanting to help Vinnie figure things out—no promises, and no sex.

It seems like a simple plan, until their “no-sex” night turns into the best date of their lives and forges a connection that complicates everything.

Overall
Beautiful in its simplicity, heartwarming, and sometimes painful, this novel was a thick blanket on a cold night.

Review
While the trope of “not realizing you’re gay until 40” may seem far-fetched, Cullinan and Sexton do an admirable job of showing how Vince of the great big Italian family got there. There are still some moments that made me roll my eyes, but most of those were in humor at his family. In the first few pages we see of his family, their classic accents almost seemed offensive, but beyond that first scene, they don’t really leave that impression (possibly because those family members don’t talk as much).

While the main romance plotline is good, what really made this story for me was the build between the main story and the side stories (specifically two older characters, which was so sweet!). There is a lot going on in Trey’s life, and when dealing with an in-the-closet boyfriend, it almost seems impossible for him and Vince to get together. But because of all the things that surround these two men (including all those things that cause problems), they are able to be together. That’s what made this special: the family. (And yes, I realize that’s the title and all.)

While this is very much a traditional romance in some ways, in other aspects the romance is secondary. Obviously to family, but also the struggle of identity, dealing with family members who have addiction problems, finances, asking for help, and being honest with yourself. It made for a very touching tale.

That being said, I found the last scene to be perfect and yet oddly too much. It works (especially for Vince’s character), but it also was a bit too cheesy for me. But that’s kind of what I love about the rest of the story, so it didn’t negatively alter my opinion of the novel.
Posted by Unknown at 18:04