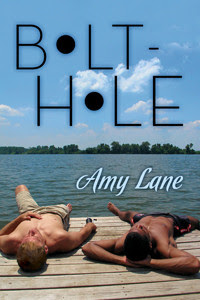 Length: 246 pages
Blurb
Terrell Washington’s childhood was a trifecta of suck: being black, gay, and poor in America has no upside. Terrell climbed his way out of the hood only to hit a glass ceiling and stop, frozen, a chain restaurant bartender with a journalism degree. His one bright spot is Colby Meyers, a coworker who has no fear, no inhibitions, and sees no boundaries. Terrell and Colby spend their summers at the river and their breaks on the back dock of Papiano’s. As terrified as Terrell is of coming out, he’s helpless to stay away from Colby's magnetic smile and contagious laughter.

But Colby is out of college now, and he has grand plans for the future—plans Terrell is sure will leave his scrawny black ass in the Sacramento dust until a breathless moment stolen from the chaos of the restaurant tells Terrell he might be wrong. When the moment is shattered by a mystery and an act of violence, Terrell and Colby are left with two puzzles: who killed their scumbag manager, and how to fit their own lives—the black and the white of them—into a single shining tomorrow.

Overall
An enjoyable exploration of race and sexuality that culminates in an ending that felt previously done by Lane, but which didn't diminish my enjoyment.

Review
I’m going to get my biggest negative off my chest first thing: the ending.

The ending itself wasn’t bad, but for me, it read too similarly to Clear Water. I really enjoyed Clear Water and it had a fine ending, but there were too many parallels between the two. It read, just a tiny bit, like phoning it in.

Now, I’m sure many readers of both books will raise their brows and wondering what planet I’m from, because they are not really that similar at all. But it seemed that way to me, so I’m saying it.

And now that I’ve gotten that out, I can go on to say how much I enjoyed this book. There were a lot of different levels going on in the story, dealing with money, race, classism, and a trembling thread of mystery. They are obviously focal points to the story, especially Terrell’s character, but I also didn’t feel like a point was being driven into my skull.

In fact, changing perceptions (both about others and the self) seems to be a central theme to the story. Colby and Terrell are both more than what they appear, and so is one of their coworkers (whoever committed the crime). Obviously their reveal is happier than that of the killer, but it’s still about external expectations of a person because of A, B, and C, while really the person is X, Y, and Q.

In that regard, Colby is almost too good at seeing beyond the A,B, and C, but it’s also shown to be a weakness (as positive traits can often be). So even though it was, at times, hard to buy that he was so broad-minded, it also didn’t bother me much because of two reasons: he sometimes suffers because of it, and it’s what Terrell needs (and sometimes you have to let fiction do its thing).

This had a small cast of characters, but that reflected well with the closed-off world that they lived in, and most of the cast play an important role at some point, helping either further the murder mystery, develop Terrell’s sense of self, or representing what Terrell would be leaving behind if he could move on. But the supporting cast also gives signs of hope (along with passing on information for the leads and the reader). Lane used all of the characters to the fullest potential.

One final thing that some readers may take issue with: There is a slight White Knight Rescue going on, but for the most part it’s just because of money and I was able to let it slide. Sometimes people do need rescued, after all.
Posted by Unknown at 08:36