Pricks and Pragmatism by JL Merrow 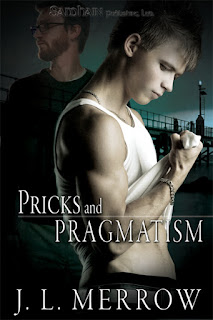 Length: 60 pages
Blurb
English student and aspiring journalist Luke Corbin should be studying. Instead he’s facing homelessness, thanks to the lover who’s just kicking him out of their posh digs. It’s not his first rejection—his father tossed him out at age sixteen—but Luke has no problem trading his favors for a home and security. Especially with rich, powerful, handsome men.

Except now, with finals bearing down, there’s no time to be choosy. He needs a roof over his head and he needs it now. Even if it means settling temporarily for a geeky, less-than-well-off chemical engineer called Russell.

Luke’s fully prepared to put out for the guy—because after all, in this world no one gets something for nothing. But Russell isn’t just a nerd; he’s an honourable nerd who wants to save himself for someone special.

At first Luke is annoyed, but the more time he spends with Russell, the closer he comes to a devastating realization. He wants to be that someone special. Except he’s fallen for the one man he can’t seem to charm…

Overall
The perfect length for this look at Luke’s change from sugar-daddy hopping playboy to a fool in love.

Review
I was bumming around and saw this on my kindle so I decided to dive in. It was short enough to entice me and yet long enough to develop everything I wanted to see. I also read it at probably the perfect time: I didn’t want something too involved, didn’t want anything too heavy, and I didn’t want to have to work for it.

It's surprisingly tear-jerking, although not an outright-crying story. Luke evolves quickly over the story, just because Russell is such a different kind of roommate that he has to change to deal with. The two are total opposites, but Merrow does an admirable job of showing how they end up meeting in the middle and how their differences work for them.

Luke is very likeable, even if you're like me and have no fondness for playboys. Because even if he does pretty much sell himself for room and board, he's not a harsh personality. He's still very human. And Russell is geeky and awkward, but also kind of adorable, especially seeing him through Luke's eyes.

The plot isn't too thick or deep, but the author uses the various side characters to build a world around these two men, and that helps the story work and not be a flimsy romance. So while it's enjoyable and the characters are a ton of fun, the plot is probably the weakest part, although it still stands up to a re-read.

Also, it took me re-reading Hard Tail to realize that the Luke and Russell that make an appearance are these two. I love that!
Posted by Unknown at 18:11